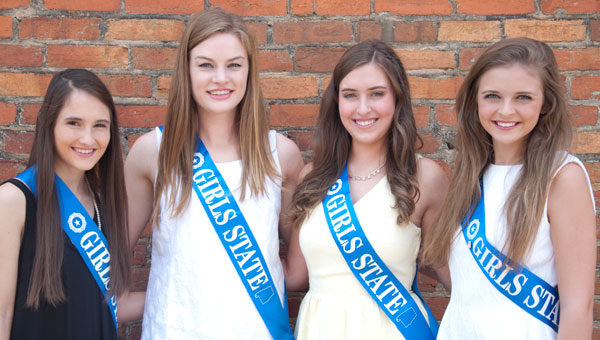 Recently, four young women in Crenshaw County had the opportunity to travel to the University of Alabama to participate in the week-long American Legion Auxiliary Girls State program.

This program not only gave these ladies the chance to mix and mingle with other young women across the state, but also gave them a taste of politics.

“We would get up very early and listen to speeches. Then we would go to our branches and propose a bill and then vote.”

Throughout the week each girl had the chance to hear speeches, run for offices and make friendships that they still treasure.

“I wanted to be a part of Girls State because I thought it would be a good opportunity to figure out what I would want to do in life.”

The first Girls State was conducted in 1938. According to its website, Girls State was created to provide an outstanding, unique and coveted educational opportunity for the young women of the nation that instills the basic ideals and principles of American government.

After participating in the program, girls will have a better understanding of not only how the government functions and operates on a daily basis, but they can also judge whether or not they would want to pursue it as a career.

“They broke us all up into House and Senate sessions and divided us up into two parties,” Ayers said.

“Some girls had the opportunity to write bills. I was in the Senate, and we passed bills and debated them.”

After being divided into Nationalist and Federalist parties and committees, each group then created platforms for their parties.

Each summer, approximately 20,000 young women participate in the week-long program all across the nation.

Many may think that programs such as these are only meant for the bold and outspoken, but Ward says she is living proof that that statement is not true.

After convincing herself that this was what she truly needed to do to break out of her shell, Ward found that her experience was one that could not be matched.

“I needed something to really help me get me out of my comfort zone, because I’m one of those people who likes to stay in one thing and not really branch out,” she said.

Participants were given the chance to run for offices at multiple levels; Hughes had the honor of being elected State Superintendent of Education while there.

“It helped me get out of my comfort zone, because I had to do a speech to get the position,” she said.

“I did the speech three times on the city, county and federalist level.”

The week was filled with speeches, meetings and notes, but for Ackerman, the best part of the week came after the meetings had adjourned.

“We had a lip synch battle on skit night. We all came together and we had never made it all the way through,” Ackerman said.

“When we all finished we were all hugging, it was great.”

Currently, Hughes plans to attend Troy University and become an anesthesiologist. She has also considered joining the Air Force later along in her collegiate career.

Ackerman has plans to attend Auburn University, and has not yet decided on her course of study.

Ayers has not made a definite decision on which college she will attend, but she does have plans to pursue a degree in health crisis management with a minor in journalism.

Each girl enjoyed becoming part of their cities, growing together and becoming close to their fellow citizens. The lessons learned here are ones that they will cling to for the rest of their lives. Ward and Ayers determined they would take their lessons and apply them to their future endeavors.

“There was a speaker that said, don’t be a title holder, be a change agent,” Ward said.

“They encouraged us to run for offices, so I did and I was elected to one. That speech helped me push myself to be more than what I thought I could be.”

“That was the main thing I took away was to make connections, because that’s how a lot of the girls got into the big offices.”

While none of these participants are currently interested in pursuing a life of politics, each took great memories and lessons away from the program.

Each said they would recommend this experience to any and all incoming girls, and cannot wait to share their experiences with those around them.