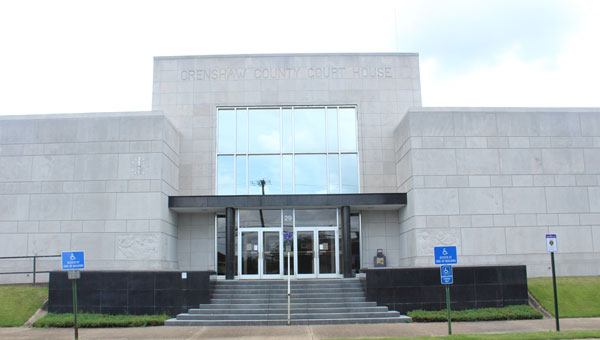 The Crenshaw County Courthouse will be close on July 13 from noon to 1 p.m. to celebrate the 60th birthday of the establishment. (Photo by Shayla Terry)

The old Crenshaw County Courthouse in Luverne was originally built in May 1898.

Fifty-seven years later, the County Commission voted to demolish that building to better provide for the citizens and the future of the county with a new courthouse.

The county voted to purchase what was then known as the Luverne Motel, which was located essentially where the Emergency Management Agency (EMA) building is now.  It was a large wood-frame home; after the building owner was allowed to remove most of the fixtures, the structure was modified to hold county offices until the new building could be erected.

“The current County Commission, which consists of Ricky McElwain, Michelle Stephens, Merrill Sport, Chris West and Charlie Sankey, have been very proactive when it comes to taking care of this building,” said County Administrator David Smyth.

The motel was not large enough for all the offices, so the court system moved to the Luverne National Guard Armory.

Since the county then essentially owned the entire block, the new courthouse was built and completed in 1956. The Commission was quoted at the grand opening as saying this new building would supply the needs of the citizens for the next 50 years. That promise seems to have certainly held true as the building now celebrates 60 years and is still standing.

“During recent years, we have replaced the HVAC system, replaced the old windows and installed a new rubber-membrane roof,” Smyth said.

“All these measures will help insure the building’s life will continue to be extended.  I think the citizens can see how much this old building means to all of us.”

All the offices are preparing for the 60th birthday cookout on July 13; the courthouse will be closed from noon until 1 p.m., so that the employees, attorneys and retirees might enjoy the luncheon together that day.