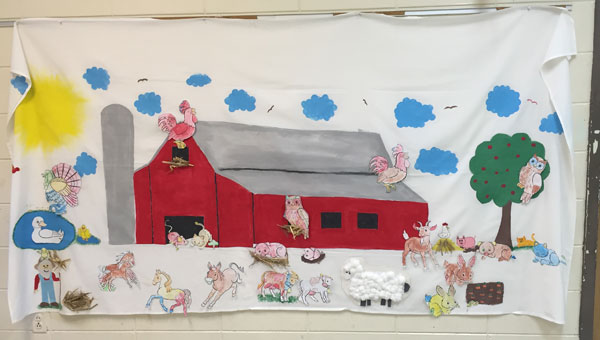 LaFreda Griffin, director of the 21st Century Programs, stated that the camp consists of students who attend the program during the regular school year but if the site has an opening, other school age students are allowed to enroll.

“A small tuition is charged to help with the purchasing of food and supplies,” Griffin said.

“Donations are sought for additional food purchases not covered by the grant. The camp begins with breakfast at 7:30 a.m., physical activity, STEM activity, classroom research, lunch at 11:30 a.m., followed by computer lab time, reading activity or tutoring, a snack at 2:30 p.m., followed by arts and craft activity, then a movie, before parental pickup by 5:30 p.m.

According to Griffin, this year’s theme was Old MacDonald’s Farm.  Students researched and studied anything on a farm such as horses, cows, chickens, hay, ducks, apples, cats, etc.  Their research also included making that particular animal or thing, for instance on the day they studied sheep, they made sheep out of cotton balls and paint, and pigs were made out of water bottles, marshmallows and construction paper.

“Students also had daily STEM activities, such as making lava lamps out of water bottles, food coloring, cooking oil and alka seltzers, robotic aircrafts that fly and animals that walk as well as the neon walking water project,” Griffin said.

Special guest appearances by magicians from Dynamite Magic and Balloons, fire and rescue units, town politicians and the Hampstead Theater performance of the Wizard of Oz gave children a memorable summer.