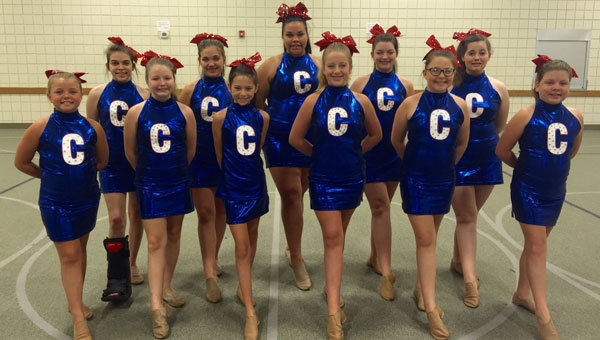 Eleven dancers make up the team, with the majority of the team being beginner dancers. The team is coached by Daun Long Pittman and assisted by Amanda Crowe Lowe.

“I’m extremely proud of this young group, they are so eager to learn, energetic and just delightful to work with,” Pittman said.

The dancers began practicing immediately following tryouts in March and have become an exciting group to watch. Every dancer was nominated by the NDA instructor, Valerie Thomas, from Louisiana, to try out for All American Dancer.

The team and individuals received numerous excellent and superior ribbons and certificates throughout the week. The highest award given to individuals at summer camp is the All American Team Award.

“We are extremely proud to announce that we had three recipients.  Rebecca Lowe, Chloe Mills and Charisse Webb were chosen as  All American Dancers, which is the highest award given to individuals at camp,” Pittman said.

The team also received a bid to Nationals, which is a team’s highest honor.  Several other individuals were honored with some prestigious awards.

Amber Styron was honored with the Herky Teamwork certificate while Ali Hendricks received the Heart of Gold award.

Aubree Harris brought home the Power Performance award, Madison White was excited to win the Above and Beyond award and Haleigh Lowe received the Step Out Style award for her high kicks.

The dancers will not only start preparing for football and basketball season but are planning to compete in the Alabama Independent School Association (AISA) Cheer and Dance Championships on August 20, at the Crampton Bowl in Montgomery.

The everyday stresses and challenges of this world tend to get us down; that’s just a fact. But what many... read more