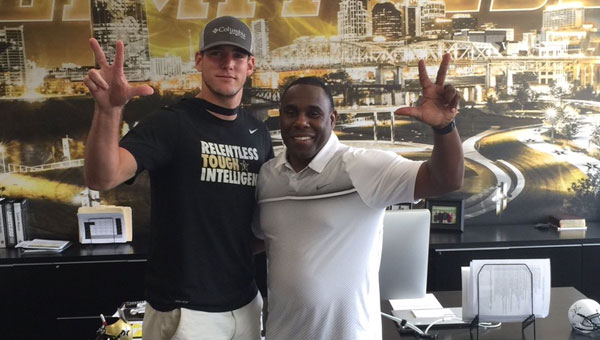 With his senior year about to begin, Jacob Free is now looking to the future. As the quarterback for the Brantley High School Bulldogs football team, Free has been offered the chance to tour multiple college campuses over the past few years, but has finally decided to “Anchor Down” as a Commodore at Vanderbilt University.

“I just loved the school and city but most importantly I loved the coaches,” Free said.

“I was on a visit at Vandy when I made the decision I was really excited and so were the Vandy coaches. It was a good time. After a lot of talking and praying with my family and coaches, I have made my decision.”

Free started his career at BHS in the sixth grade after transferring from Luverne High School. Since starting at BHS, Free has played baseball and football. Up until his ninth grade year, his main sport focus was baseball, but after getting a little more involved with football camps, he soon believed he could make a living out of this sport.

Ashley Kilcrease, BHS head football coach, has had the opportunity to work alongside Free for the past five years, and is proud of Free’s accomplishments.

“I think he made a great decision. He gets to attend one of the best academic schools in the country, live in a great town like Nashville, and play in the SEC,” Kilcrease said.

“I think he has proven that small town guys can make it at the very highest levels and we are very proud of his accomplishments.”

While Free may not have a clear idea of what field of study he will pursue, he does know that his time at Vanderbilt will certainly be no walk in the park. He is prepared to take the scholastic values he has gained from BHS and put them into action once he gets into the college setting.

With this decision behind him, much of the stress that usually accompanies senior year has already been eliminated for Free. Now that he has a sure idea of his future, he can use his last year at BHS to hone his leadership skills and relax.

“I think playing at Brantley has helped me tremendously,” Free said.

“The coaches have made it possible for me to play at the next level.”

Free has enjoyed his time at BHS and attributes much of his success to the staff of BHS and his fellow students.

“I love it here, and I believe that where I am today with football is because of the coaches here and everybody here,” Free said.

While there is still a long road ahead filled with practicing and scholastics, Free and his coaches feel confident that the task will not be too much for him to handle.

“I would like to thank all the coaches and programs who have recruited me and provided me with an opportunity to play college football, but most importantly I want to thank God for blessing me,” Free said.

“Without Him, none of this would be possible. I also just want to say thank you to everyone who has believed in me.”