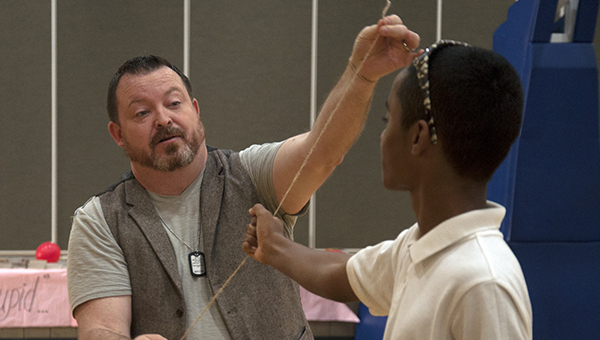 Magician and mentalist Charles Wright demonstrates different tricks for the audience to show kids what a magical experience reading can be. (Advocate Staff/Beth Hyatt)

Nowadays, reading seems to have taken a backseat to the technological devices that surround us. With this in mind, Rheta McClain, administrative assistant for learning supports for Butler County Schools, decided to spice up the traditional art of reading by hosting the Reading Festival 2016.

“The Reading Festival is intended to increase students’ excitement, and encourage them to read,” McClain said.

“They can see the fun in the characters and some of the books coming alive.”

Special guest magician and mentalist Charles Wright entertained the audience with a few tricks and gave students the chance to interact with the magic firsthand.

Along with Wright, international recording artist and inspirational speaker Cupid talked to kids about his difficulties in school and how, after much perseverance, he got his life back on track, graduated and now travels around the world.

By incorporating these different activities into the mix, McClain hopes that children will see that reading truly is an engaging and exciting activity.

“We want them to see all different sides of the benefits of reading,” she said.

The idea for the festival came to McClain after attending a Scholastic Family Engagement workshop. While there, McClain heard of the multiple ways students, families and communities were getting involved in reading.

Since the schools already had summer programs in play, McClain decided it was the perfect time to incorporate some more reading and play into the day.

“This was just a way to bring awareness and it’s just evolved,” McClain said.

The initial book challenge began at the end of the school year. Each student was given a book to read for the summer and two postcards. Once the student had finished the book, he or she would write a summary of the book on the postcard, find another book that was not assigned and write a summary of that book and mail it to McClain at the Central Office.

In the recent generations, reading has attained more of a negative stigma than in the past; the abundance of technological devices, McClain says, may be one of the leading causes of this.

“I don’t know how much kids are reading at home anymore,” she said.

“We didn’t have a lot of the different gadgets and things to take our attention when we were growing up, so we read. Now we’re trying to really push back to that, inspire parents and students and show them the importance of reading.”

McClain also issued a reading challenge to the Butler County communities in which a group would hold a read aloud. The goal for this challenge was to gather students in grades kindergarten through eighth for the read aloud, ask them some questions about the story, fill out a card and send it and a picture to McClain at the Central Office building.

McClain says that so far only one church in the Georgiana area, Second Baptist Church, has participated in the challenge, but the summer’s not over yet.

McClain stressed this is a team effort.

“I could not do this alone. I have all the leaders of the schools and even those who aren’t here, like our bookkeeper. I can’t get this done without them,” McClain said.

LBW Community College is seeing a higher enrollment this summer over last year. So far this summer, enrollment is 892... read more