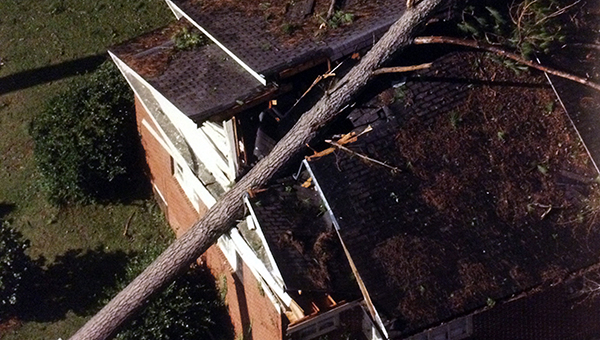 A house on Overlook Drive took a direct hit from a falling tree crushing parts of its roof when in 2004 Hurricane Ivan marched through Butler County bringing with it 100 mph winds. (File photo)

It only takes one.

The 2016 Atlantic hurricane season forecast released in May by Colorado State University calls for the number of named storms and hurricanes to be near historical averages.

A total of 12 named storms, five hurricanes and two major hurricanes are expected this season, which began this month, according to the forecast prepared by CSU.

While it’s been more than a decade since a major hurricane struck the United States, that doesn’t mean Alabamians shouldn’t be prepared, according to Sandy.

“It only takes one hurricane to do significant damage,” she said.

Butler County residents that endured Hurricane Ivan in 2004 know that’s all too true.

Ivan roared onto shore on Sept. 16 and made its slow march north and 100 mile per hour winds ravaged south Alabama, scattering trees and power lines across Greenville and Butler County and causing considerable damage to residential areas. Some homes went weeks without power and water.

Sandy said when storms form in the Gulf that residents should remain alert and take the threat seriously.

“They need to pay attention to the storm, like how fast it’s moving, the direction and the path,” she said. “They need to keep in mind that hurricanes might be loaded with tornadoes. Ivan hit the U.S. as a strong Category 3 hurricane, and a record number of tornadoes came out of it.”

“We take these storms very, very, very seriously,” said Greenville Mayor Dexter McLendon. “Once you get hammered like we did with Ivan you make changes real quick.”

McLendon admitted hurricanes were one of the least of his concerns prior to Ivan. Hurricanes were a coastal problem and would have little impact on Greenville and Butler County, other than having police on standby to ensure evacuee traffic moved as efficiently as possible up Interstate 65.

Or so he thought.

“Man, I was one of those people that said, ‘Ya’ll don’t need to worry about those things…they’re not coming up here,’” he said. “Well, that morning when I drove out of my driveway, I changed my mind. It changed me.”

Sandy is hoping that the fact that a hurricane hasn’t greatly impacted the area in more than a decade won’t lull residents into a false sense of security.

Again, it only takes one, and once the storm hits, it’s often too late to take the necessary precautions.

“Everyone needs to have enough food and water for at least three days,” she said. “FEMA is now suggesting that everyone have enough supplies for a week. Of course, they will want all of the basics like flashlights, radios, dust mask, emergency blankets, etc.

“They need to fuel all vehicles, and they should obtain supplies, like a generator when they can. We do the preparedness tax-free weekend in Butler County so that items like a generator will be more affordable. They should take advantage of purchasing preparedness items if possible. We have weather all year, and can easily lose power at any time throughout the year. People should also have an out of state contact in case people are separated.”

There is no strong correlation between the number of storms or hurricanes and U.S. landfalls in any given season. One or more of the 12 named storms forecast to develop this season could hit the U.S., or none at all. The U.S. averages between one to two hurricane landfalls each season, according to NOAA’s Hurricane Research Division statistics.

But as Sandy and McLendon both pointed out, one is enough.

“It only takes one,” Sandy said.