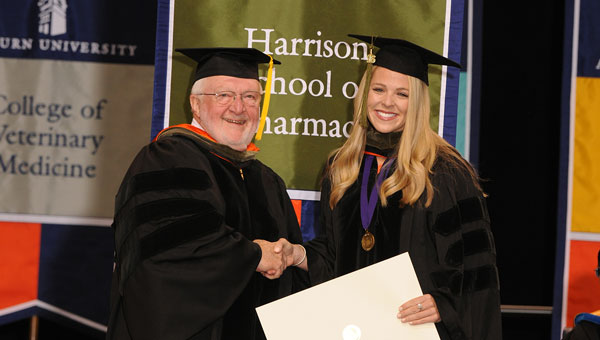 Jordan Griggs Bowers, a 2009 graduate of Crenshaw Christian Academy, recently graduated from Auburn University with a degree in pharmacy.

Auburn University’s James I. Harrison School of Pharmacy held its Spring 2016 commencement ceremony on Tuesday, May 10 at Auburn Arena.

The class of 2016 included 113 students receiving the Doctor of Pharmacy (Pharm.D.) degree.

Among the Pharm.D. graduates was Luverne native Jordan Griggs Bowers.

A 2009 graduate of Crenshaw Christian Academy, she is the daughter of Bobbie Bryan Bowers and the late Joseph Richard “Ricky” Bowers.

She received a bachelor’s degree in biomedical sciences from Auburn University in 2014.

She has accepted a full-time pharmacist position with Walgreens.