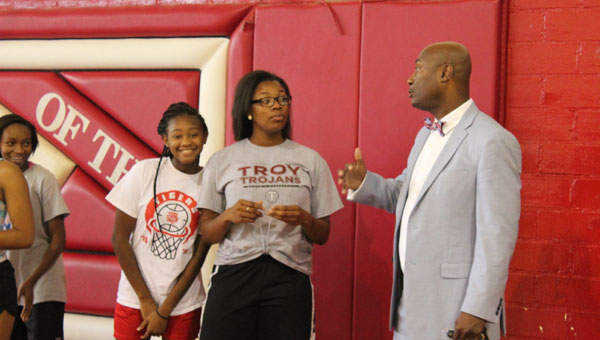 After completing his first year as principal at LHS, Howard now looks to the future to see what all he can bring to the school. (Photo by Shayla Terry)

Jamie Howard, the first African American principal at Luverne High School, has completed his first year as head of the tigers.

Howard has been with LHS since 2013, initially serving as assistant principal for two years before being promoted to his current position.

“God put me in the exact spot I was supposed to be.”

A graduate of Stillman College and Alabama State University, Howard worked in the Montgomery County School System for 13 years before coming to Luverne.

Howard says since arriving at LHS, he has gained an immense amount of knowledge.

“It was unbelievable,” Howard said.

“I’m living proof that the phrase ‘you’re never too old to learn’ is extremely accurate.”

The student body has played an integral role in the success of his first year.

“The students were phenomenal,” Howard said.

“Since my first year here reaching the student body was my goal. If you can’t reach the students, you’re not going to be able to succeed.”

Howard stated the completion of his first year feels great.

“When you feel like you’re qualified for something and have put in the work, it’s a great feeling for others to acknowledge that you have the skills and give you an opportunity.”

In the upcoming school year, Howard hopes to increase professional development for LHS teachers and increase rigor and technology integration in the classroom.

“By increasing rigor and technology integration, I feel we prepare our students best for the world that they are heading out into,” Howard said.

“It also helps with them getting more scholarships and being able to maximize their higher education experience.”

Howard foresees a bright future for his career at Luverne High School.

“In moving forward, as long as we’re doing what’s in the best interest of the students, you can’t go wrong,” he said.

“Luverne is rich in tradition and has a great academic foundation. My hope is to continue to build upon both.”