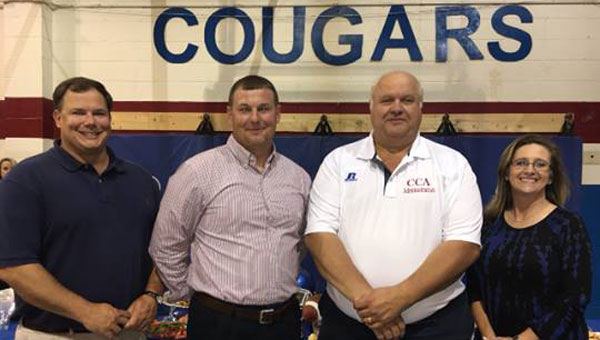 SPECIAL TO THE JOURNAL: RAILEY AYERS

At a meet-and-greet reception held in the Crenshaw Christian Academy gym on a rainy Tuesday night, newly hired athletic director/head football coach Mike Sims could’ve mentioned any of the impressive accomplishments that don his resume after he was introduced to the crowd, such as: being a six-time AISA all-star coach, coaching 18 AISA all-star selections, being head of the third winningest football program in the state from 2010-2014, coaching 14 NCAA signees, owning Autauga Academy’s win percentage record, He coached the school’s only five Division I football signees, competing for seven state championships in the “big 3” sports programs at Autauga, and coaching Sparta Academy to their first playoff appearance in a decade in 2008. Sims made no mention of any of them.

“I’m going to start by telling you all that I’m not politically correct,” said the humble 34-year-old after thanking everyone for attending.

“I am going to do everything I can for these kids. I am going to be there for them and develop them into young Christian men and women before anything else. I am going to tell these kids that I love them, because I do. I tell my son I love him every day, and these are now my children too.”

A few more remarks were made, and a deep applause followed. Onlookers jumped in line to grab plates and shake coach Sims’s hand. A few football players could be heard uttering things like, “I actually am excited to play for this man.”

Parents introduced themselves, shook hands and introduced their kids, but coach Sims knew most of them by name after only a day. “I am so excited to be here,” said Sims.

“We’re going to come in this summer, develop these kids spiritually, academically and athletically, and hopefully win them a few state championships while we’re at it.”