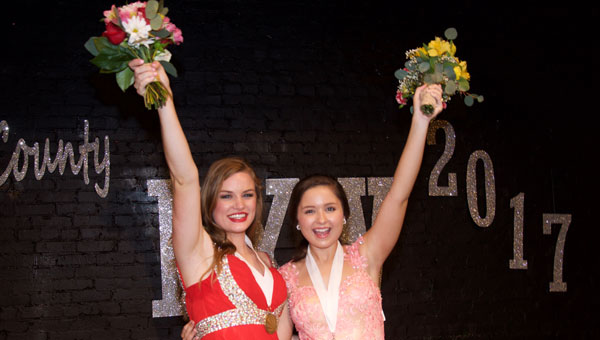 “I honestly did not think I was going to do it until I realized my school didn’t have a representative. And I thought, you know we probably need a representative, that would be a nice thing,” said Railey Ayers when asked why she wanted to participate in this year’s 2017 Crenshaw County Distinguished Young Women (DYW)program.

“So, I just decided I would more or less wing it, and the outcome was a lot better than I expected.”

Saturday night in the auditorium of Luverne High School, Ayers had the opportunity to compete against five other young ladies to vie for the title of Crenshaw County’s 2017 Distinguished Young Woman. At the end of the night, she arose victorious and claimed three other victories in the categories of fitness, scholastics and interview.

Founded in Mobile by the Mobile Junior Chamber of Commerce, DYW is the largest and oldest national scholarship program for high school girls. DYW has established a unique system to evaluate contestants in the categories of scholastics, interview, talent, fitness and self-expression.

After a week of training for the program, Ayers claims that her favorite part of preparation was the food the girls received.

“We had different people cater every day, and I had some of the best chicken fingers I had ever had in my life from The Dinner Table,” she said.

“It was the highlight of my week.” 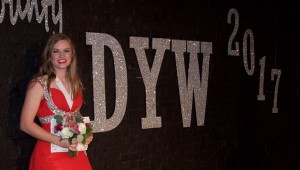 In the talent portion of the competition, Ayers entertained the audience with a monologue she wrote herself entitled “The Wall,” loosely based on her own experiences in school.

Ayers stated that she actually wrote the monologue while on the bus to Girls State; the process took about 10 minutes. Ayers said that after combing the Internet for monologue options, she could not find one that suited her preferences; so, she dove into writing.

“I never actually memorized it. It was more or less of an improv when I got up there and did it,” she said.

As the time for announcing the winner approached, Ayers was not terribly concerned with whether or not she would win or lose; she had enjoyed the ride thus far and was happy to take whatever came her way.

Ayers says that after hearing the winners of the first three categories, she began to count herself out and prepared to face defeat.

“I really never even thought I was in the running for it. After the first three categories, I had accepted my fate and said I would just stand there and be happy for people. I’d had a fun week, that’s cool,” she said.

Ayers says that the shock hit her all at once as she stood on stage because winning was the furthest thing from her mind at that point.

This experience has been one that Ayers says she will treasure, and the friendships she has made because of her participation is just another perk of the program.

“I met some really great girls through this program that I would love to stay in touch with,” she said.

After giving it some thought, Ayers decided that the biggest lesson she took from participating in the program was to never count yourself out regardless of the circumstance.

“Don’t count yourself out before it’s over, because I was definitely not prepared for it,” she said.

“My mentality going into it was never take yourself too seriously, and I realized that this next round will be a lot higher of a skill level. So, I probably need to start taking myself a little more seriously, but at the same time I want to enjoy the ride.”

Ayers will continue to prepare for the next round of the competition in January 2017, and is ready to face the challenges that lie ahead.