Russell retires after 35 years at HHS 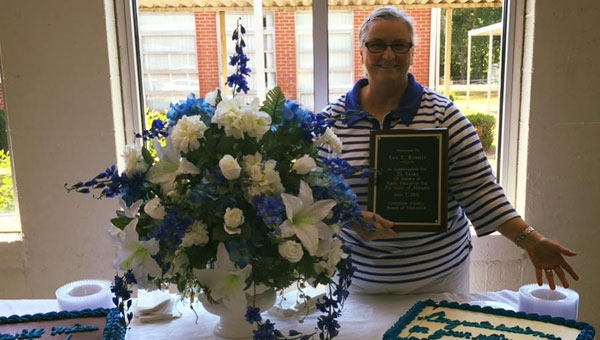 After 35 years of serving the students of Highland Home School, Eva Russell will now use her retirement to travel the nation and visit her family.

After 35 years in the world of teaching, Eva Russell has bid farewell to the Highland Home School Flying Squadron.

Originally from Tampa, Fla., Russell attended college at the University of South Florida and stayed until her senior year. After marrying, she moved to Texas and worked in a girls’ home, as well as a private school.

In 1975, Russell made the move to Highland Home, and continued pursuing her degree at Troy State University.

“Every time I had children, I wanted to put them first, so I waited until they were in school before I would go back,” Russell said.

“That happened three times. I have three kids who all were raised in Highland Home, went to school in Highland Home and graduated. All are in different states now and have fantastic jobs from their education at Highland.”

Russell began her career as a substitute teacher at HHS in 1981 while she finished her degree at TSU. After graduated in 1991, she was hired at HHS full-time.

During her time at HHS, she served as a math instructor. In 2001, she taught all advanced math classes for ninth through 12th graders, as well as seventh grade math. Russell states that for the last 10-15 years of her career, she taught the senior high (11th and 12th grade) math classes.

Russell has also served as an adjunct teacher at LBWCC for the past five years, and gave students the chance to earn college credit by teaching dual enrollment classes at HHS.

Russell continued to pursue her own educational dreams along the way, and also earned a degree in mathematics education.

Russell says that after 10 years as a substitute and 25 as a teacher, she has seen her fair share of principals, and has also had the opportunity to teach a few along the way. She has also taught many students who later went on to become faculty members at HHS.

“There were, like, 20 something teachers at Highland that I taught. And there were many more that I was a sub for,” Russell said.

“In fact, when our principal was a student at Highland Home, I subbed for him. The kids didn’t like math when I would first get them, but by the end of their senior year they would love math, and that’s what my goal was: to teach kids to love math. It doesn’t have to be something you dread,” Russell said.

Of all the memories she shared with her beloved school, Russell said that her favorite memory would have to be the way she incorporated math into the pep rallies.

While at HHS, she served at the Mu Alpha Theta mathematics honor club sponsor; she and her club students would do what was dubbed a math statement in which they would take the numbers of the football players to form mathematic equations that would ultimately spell out victory.

“We would add 33 to 26 and it would equal victory, divide it by something equals victory and that’s what the game was,” Russell said.

“It got to be where kids would come up to me on Friday and ask me, Ms. Russell, are you going to use me in the math statement today? They looked forward to having the math along with their pep rally, and how many other schools do math with the football players?”

While the life of a teacher brings many lessons, Russell stated that the greatest lesson she has learned during her 35 years of teaching has been to have patience.

“You may think that the children are not learning, but when you least expect it, one of them will surprise you,” Russell said.

“I’ve had many students over the years come back and thank me for teaching them math, and I can remember when they would be sitting in class saying ‘I ain’t never going to use this.’ Then they’ll come back to me and say, Ms. Russell, I used that trig you taught me.’”

While some in larger areas may look down on smaller schools and smaller communities, Russell sees the positive aspects of such size. Being originally from a larger area herself and having attended three different schools during her younger years, she understands the importance of a quaint atmosphere and a family-oriented school.

“It becomes more of a family-oriented type situation,” Russell said.

“Being at Highland where we have small classes compared to what I had where I graduated, it becomes closer. You become closer to the students, inside and outside of school. An after school activity becomes a community event. If the community’s involved, then the students have a better chance of success.”

Since retiring, Russell has made plans to travel to see her family. Having children and family in California, Pennsylvania, Georgia and Florida will certainly give her many opportunities to road trip and enjoy her time off.

“I just want to thank the Lord that He’s given me a good time at Highland Home School. I might not have graduated from there, but I think I bleed blue like the rest of them,” Russell said.