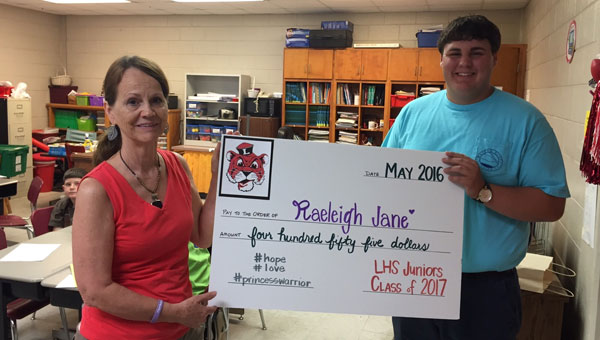 During an ultrasound on January 14, a four-inch by four-inch tumor was found in the abdomen of two-year-old Raeleigh Jane McCartha.  She was sent directly to Children’s Hospital in Birmingham, Ala., where she was diagnosed with neuroblastoma, a form of childhood cancer.

It was later determined that McCartha had stage four neuroblastoma, and was in the high risk category.  During scans, the cancer was found to have spread to her bones, arms, legs, spine and pelvis, but thankfully had not spread to any of her organs.

Since then, the Crenshaw community has gathered together to raise money for the McCartha family by hosting fun runs, t-shirt sales and many other fundraisers. The most recent fundraising endeavor came from the Luverne High School junior class.

“Mrs. JoAnn McCartha (grandmother to Raeleigh) is a third grade teacher at LHS. She taught each of us when we were in the third grade,” said Tyler Powell, junior class president.

“While planning for the prom, the junior class thought it would be a nice gesture to reach out and help this family. It was decided to ask for donations when guests entered the gym for prom lead out.”

JoAnn McCartha has taught at LHS since 1994, and in that time she has seen the classes grow closer and come together as a family. This is an attribute of the school that Powell himself has noticed in his time at LHS.

“I feel like we are a close family at Luverne,” Powell said.

“We are always willing to help when someone in the community is going through hard times. It is always better to give than receive.”

In total, the class raised $455 for the McCartha family, and presented a check to JoAnn at the end of the school year.

“I was not surprised, just in awe of the kindness and generosity of so many people since we first found out our sweet girl had cancer,” JoAnn said.

“I had been told earlier that the junior class was planning a type of fundraising connected to their junior/senior prom. Everything had gotten so hectic at the end of school that I had forgotten about it.” 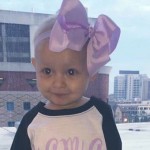 According to her grandmother, Raeleigh was recently checked out from head to toe, and had surgery to put in a new port with double lumen lines in order to receive stronger chemo and stem cells. JoAnn says that these cannot go in the same line because the chemo would kill the stem cells.

A bone marrow biopsy was also performed, as well as a scan in the left abdominal area where the tumor had been located. Raeleigh also received a full body scan to check for cancer in her bones and other places.

The preliminary results showed no cancer; however, the bone marrow biopsy showed some but less than five percent.

“We serve an awesome God. He has been with her thus far on this journey and will continue to heal our beautiful baby. The south is a great place to live-Luverne is a great place to live.  When people are in need, people in this area rally around them. Honestly, so many people have been so good to Josh, Rachel and Raeleigh you just can’t help but to be in awe.”