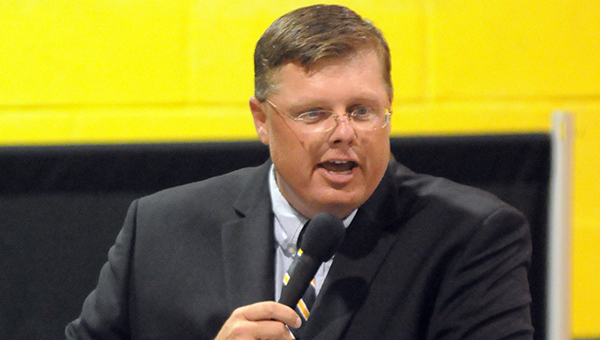 Former McKenzie School head football coach Miles Brown has been named principal of McKenzie School. The hire was approved by the Butler County Board of Education Tuesday night. (File photo)

McKenzie School has a new principal, and he’s no stranger to the school or the community.

On Tuesday, the Butler County Board of Education approved the hire of Miles Brown as the school’s new administrator, replacing Mike Gunter who announced his retirement in April.

“This is a dream job for me,” Brown said. “To be able to be the principal of the school I graduated from is a huge honor.”

Now, like when he was on the sidelines with the Tigers, Brown will once again be calling the shots, this time in the school’s hallways.

“In some ways being a principal is like being coach,” Brown said. “You’re still dealing with kids and parents. It’s still about teamwork and getting everyone to buy in and work toward a goal. You’re leading a team of teachers, parents and students. I’m excited about it.”

Brown said his three years working for Gunter have helped prepare him for the next chapter of his career.

“He was a great boss,” he said. “He’s a great friend. He did a lot of good things for me and really let me be me. I learned a lot from him and feel like he helped prepare me to take on this role.”

Prior to returning to McKenzie as head football coach, where he posted a 47-27 record and won a region championship, Brown worked at Sweet Water High School, Pleasant Home High School, W.S. Neal High School and Georgiana School. He’s worked in education for 18 years.

Butler County Schools Superintendent Amy Bryan said Brown was simply the right choice for McKenzie School given his ties to the school and the community.

“It’s a big job,” she said. “It sets the tone for the entire community.”