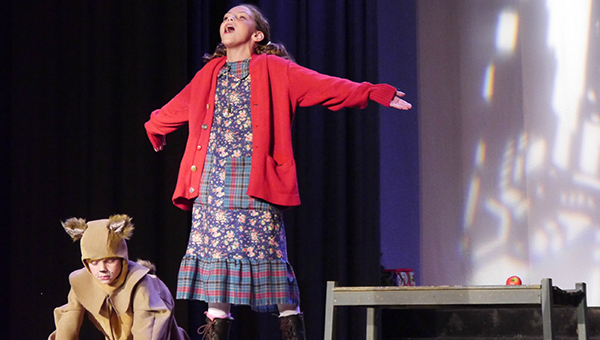 Take 25 talented and enthusiastic youngsters, add a classic American stage musical and blend with a bevy of community theater veterans ready to work with them.

What you get is a really big show.

The nearly full house on Saturday night’s final performance at the Ritz showed their approval of the Greenville Area Arts Council’s production of “Annie Jr.” clapping, cheering and giving a standing ovation to its enthusiastic young talents.

Kalee Russell, a familiar face to Putting on the Ritz audience members, proved to be a little girl with a big voice and plenty of charm and spunk in the lead role.

Every good story needs a baddie or two. Vivian Gates as Annie’s nemesis, the mean-spirited orphanage administrator Miss Hannigan, along with Reagan McLain and Ally Johnson as the comically scheming duo of Rooster Hannigan and Lily St. Regis, each fit the bill perfectly.

As the millionaire Oliver Warbucks, who adopts Annie as his own, Roc Thigpen ably showed off his dancing and singing skills along with his acting chops. Katelyn Stinson proved very believable as Warbuck’s efficient and caring personal secretary, Grace Farrell.

Rounding out this capable cast were Annie’s fellow orphans Jessica Veazy, Anna Son, Whitney Veazy, Maire Scott, Lily Kathryn Van Dyke, Catherine Corley, Shane Boone as Lt. Ward and last, but certainly not least, Isaac Lowery as Annie’s beloved canine, Sandy. The musical, set in Depression-era New York City and based on the popular long-running comic strip “Little Orphan Annie,” was the first Broadway musical production (rather than a revue such as the annual POTR fundraiser ) mounted by the GAAC.

“It’s been quite a journey . . . we started out rehearsing in the Ritz Reception Room, then here on the stage, then at First Baptist Church and back here to the Ritz stage,” said show director Nancy Idland. She praised her young cast and the teens and adults who assisted her in making the show a reality, including Jerry Wilkerson, the production’s musical director and Joni Thomas, wardrobe and props mistress “and a woman who can do everything.”

“These kids had a lot to learn, between the choreography, their lines and songs and juggling all this with school, sports and after-school activities,” said Idland.

“We have such an incredible pool of young talent in our community . . . and we are hoping this is the first of many shows to come highlighting our Ritz Kids.”

The Greenville Advocate donated $470 to the Greenville Police Department on Monday. The funds were raised through a child safety... read more