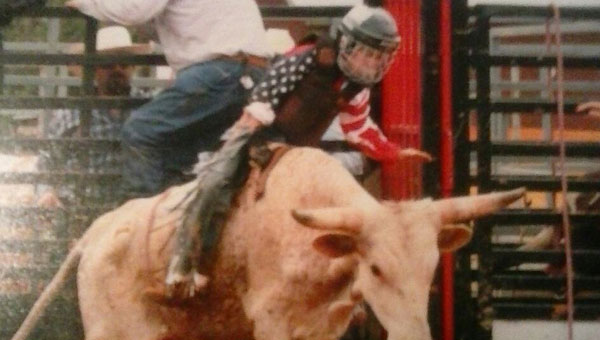 At the age of two, Colton Carpenter had the chance to ride his first bull. Since that day, he has travelled the state and nation competing.

While many kids are out playing sports such as basketball, baseball and football, eight-year-old Colton Carpenter decided to take his extracurricular activities in a different direction.

His unique choice of an after school activity began at the ripe old age of two, and from there grew into a sport that he one day hopes to make a career out of

“I got in out of the blue,” Colton said.

One day while attending his sister’s rodeo in Troy, two-year-old Colton found his way into the shoot and had the chance to ride his first ever bull.

“There was a child that was in the shoot riding that was just squalling like they had dropped him in on a grizzly bear,” said Colton’s father Kelly Carpenter.

“He was clawing trying to climb out, and when he got out I happened to look down and Colton wasn’t standing by me any more. I looked out there and sure enough it was him that had climbed in there.”

Kelly says that since his son was only two and a half at the time, he was not supposed to be eligible to ride, but because the manager of the rodeo knew Kelly, Colton was then allowed to try his hand at bull riding.

“We had to run him down and pull him loose; he wasn’t letting go,” Kelly said.

Since then, Colton has tried his hand at multiple other rodeo categories, such as goat tying on foot, dummy roping and calf and steer riding. Throughout his years of rodeo work, he has decided that the most difficult aspect of the job is actually staying on the steer. 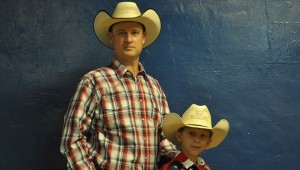 Kelly Carpenter and his son Colton enjoy the atmosphere of the rodeo and are excited to be involved in the thrill of the ride. (Photo by Beth Hyatt)

Kelly stated that while many parents look at rodeoing and deem it unsafe for children, he sees no difference in the dangers of riding in the rodeo versus playing football.

“I compare it to football. One football game, I sat and watched my son take 42 hits of helmet to helmet contact in a little league game,” he said.

“In the course of one rodeo, he gets on for one to two rides, he usually lands on his side and doesn’t take the head contact that he does repetitively in football. There are kids that die every year playing football. You might see one or two youth cowboys that actually pass away; it’s just not as common.”

Many people are present in the arena at the time of the rides, and Kelly doesn’t fear for his son’s safety knowing that he, along with other responsible individuals, are there to lend a hand when needed.

Colton stated that his favorite part of the rodeo experience would have to be “ending up with the money or a buckle.”

Colton and his father have also had the chance to travel all across Alabama, as well as to Texas, Colorado and soon to Tennessee.

Even though some may think that the life of a rodeo star is one that wouldn’t leave much time for scholastics, Colton successfully passed his second grade year at Luverne Elementary School and made the all A honor roll.

With the rest of his career ahead of him, Colton plans to continue to ride and learn all he can. It is his father’s hope that following this activity could also one day help his son when applying for college scholarships.

Colton is scheduled to compete once again this coming August, and he is already chomping at the bit to get back in the shoot.

“Really right now there’s not much competition, so I’m trying to get more of my friends involved so it will be, maybe, a little harder and more fun,” Colton said.