Twins come together for enlistment, promotion 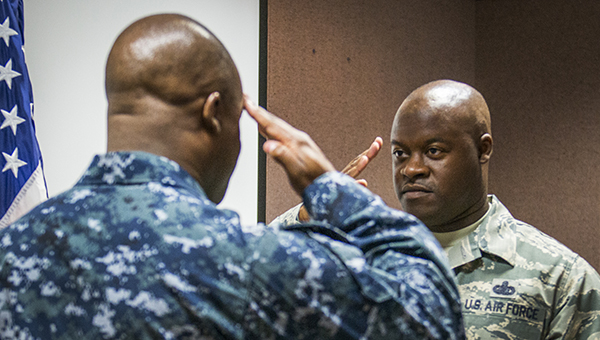 EGLIN AIR FORCE BASE, Fla. — Almost three years ago, Master Sgt. Antone Scott finally realized a military goal of having his identical twin brother, a Navy officer, administer the oath of enlistment to him for what was thought-to-be his final time.

But after three years of changes and hard work, the Scott twins, native of Greenville, came together again for another enlistment, but this time it came with a promotion as well.

On the morning of May 31, Lt. Cmdr. Anthony Scott, enlisted Antone into the Air Force for a second time.  As long as Antone waited to have his big brother (by three minutes) administer the oath to him in 2013, he said this recent one is more significant because it’s tied to his promotion to senior master sergeant.

“My brother has always been in my corner through the good and bad times and has never faltered for 44 years,” said the new Senior.  “I feel truly blessed.”

Anthony agreed with his brother that the promotion made the shared ceremony extra special.

“I’m extremely proud of SMSgt Scott.  It took hard work and commitment to get here,” said Anthony, currently stationed in Norfolk, Va.  “The wheels of his career are spinning at full-speed now. Keep going and don’t hit the brakes.”

The twins, who both began their careers in 1992 as E-1s, have progressed quite a bit since the last enlistment oath in 2013.  Antone deployed in 2014, then moved from the 96th Logistics Readiness Squadron to the 96th Aircraft Maintenance Squadron. He also welcomed a second son, of three, into military service.  He now has one in the Army and on in the Air Force.  He also completed his Master’s of Business Administration degree last year.  He said he jumped at any chance to be involved in leadership and decision-making processes to prepare for his promotion.

“I was hopeful about the promotion to senior, but it is not an easy stripe to earn,” said Antone. “(When I found out), it was an amazing, humbling feeling combined with a big sigh of relief. I thanked my leadership for believing, mentoring and trusting me to get the job done.”

As for Anthony, the N33 Force Travel commander at Navy Reserve Forces Command, he accepted his first commanding officer position.  He will take command of the Naval Operational Support Center in Greensboro, N.C. next year.  He also became a grandfather.

Antone’s enlistment will push the brothers beyond 50 years of combined service and with their sons’ succeeding them, the Scott family military tradition continues.  Although, Antone just might have at least one more enlistment in the future.

Antone downplayed talk of reaching chief master sergeant, saying if it’s on the horizon, he would be ready for the challenge.  His big brother on the other hand, fully expects Antone to reach the Air Force’s highest enlisted rank.

“His skills are unmatched, his knowledge is priceless and his experience is invaluable to the Air Force,” said Anthony proudly.  “I always knew that first enlistment we experienced together would be for Antone to reach senior.  So, I’m presuming this new re-enlistment will allow him to make chief.  I will gladly re-enlist him to carry his total service to 30 years.”

LBW Community College has announced its academic honor students for the spring semester. A total of 93 students were named... read more