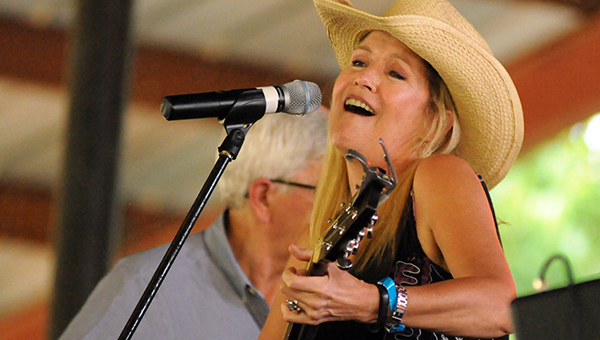 Kim Carson was one of the many musicians that paid tribute to country music legend and Butler County native Hank Williams during the 37th annual Hank Williams Festival, which was held in Georgiana on Friday and Saturday. (Advocate Staff/Andy Brown)

For the Montgomery native, Chapman is “sacred.”

“(Chapman is) where we came from, Moore said. “It’s where we all go for holidays and when we need to get away, and it’s where I hope to live the last years of my life and be buried. Chapman is the one place where I can always go that I am guaranteed to get that wonderful ‘home’ feeling, and for that, I am eternally grateful.”

With that in mind, it only made sense that the singer and songwriter would bring her music to the stage of a festival honoring Georgiana native and country music legend Hank Williams, Sr.

Moore was one of the performers at the 37th annual Hank Williams Festival, which took place Friday and Saturday in Georgiana.

Not only was she a first-time performer, but also a first time festivalgoer.

Moore, who moved to Nashville shortly after graduating from the University of Alabama in 2011, got that chance on Saturday and it was certainly all she had hoped for and more.

“I absolutely loved playing the festival, the sound was great and I so enjoyed playing for my family and lots of new ears all at once in the same room,” she said. “A lot of my extended family had never seen me perform professionally with my band from Nashville, so it was a real treat to get to show them what I do on a professional level. I think they were surprised and impressed because they’ve never seen that side of me, the professional musician side of me, and it was so wonderful to have the opportunity to show them. I truly loved every minute of it, and I so hope to play every year from now on.”

The Montgomery native said she has recently come to appreciate the musical genius of Hank Williams, Sr.

“I definitely think my musical environment influenced me drastically, as I was always surrounded by country, bluegrass, and roots music, coming from the south,” she said. “Having said that, I also listened to a lot of other music as well. I grew up on and loved, and still love, Motown, blues, soul, Disney music, 90s, jazz, rock and even classical. My influences come from literally every direction, which is why my music tends to blur genre lines, and I intend for it to be that way. I love that I fit into the “country” genre enough to play festivals like the Hank Williams Festival, though I can’t say that I was listening to a tremendous amount of Hank Williams as a child, but rather his successors, such as Emmylou Harris, Dolly Parton and Alison Krauss. I’ve honestly begun to appreciate Hank Williams’ music more as an adult songwriter, because the stories in his songs and the way he can tell those stories in such a succinct yet thorough way is amazing to me, and that’s because I have the perspective of someone who knows how hard it is to do just that. The goal of a good song, and what Hank was so great at, is to capture a feeling that is universally understandable and that everyone can relate to, that feeling or thought that connects the listener to the writer. This is ultimately what I believe is the power of music, that music connects two complete strangers who have never met, talked, or even laid eyes on each other, yet somehow they connect on the notion that they feel exactly the same way about something going on in both their lives. To do that in a way that everyone understands without question in three minutes or less is a very, very difficult task, and Hank Williams was a master at it. That’s where the true awe of Hank’s legacy lies for me, in his amazing ability to connect people through his music.”

The festival was headlined by country music superstar Mickey Gilley, but the real star was Williams.

Many of the musicians that took part in the show paid tribute to Williams by playing his songs, such as Kim Carson, who opened her performance by playing “Jambalaya.”

Carson, who traveled to the festival from her home in New Orleans where she regularly performs with her band Kim Carson and the Real Deal, said Williams has without a doubt been one of her biggest musical influences. In fact, the first song she ever performed in public was Williams’ “I Can’t Help it if I’m still in Love With You.”

“Hank has most certainly influenced my singing and my songwriting,” she said. “Hank Williams was a brilliant songwriter. He gets the meaning of a song across in very few and simple words. Sometimes when I’m writing and getting tangled up in words ‘overwriting’ a song, I think about how Hank just cuts right past all the fat and right into the meat of a song. He strips back all the unnecessary words to give the listener only the simple powerful words and a melody that stays in your head for days. Hank taught me to say what I mean in as few words as possible.”

Carson, who was playing her first Hank Williams Festival thanks to a chance encounter with Sherri Brackin at the Hank Williams International Fan Club house, said one of the highlights of the weekend was connecting with so many other Hank fans.

“One big highlights was that I came to the festival by myself, but once I got here I didn’t feel alone. I met so many friendly people and new friends. This is a place you can come alone and feel part of something.

“Another highlight was the music — real country music. I love hearing these great songs. Mickey Gilley put on a fantastic show Saturday night. I’ve been talking about it and telling my friends for days how wonderful and entertaining he was. I love how he worked the video clips into the show giving us history about his family and career.”

This may have been Carson’s first Hank Williams Festival, but she’s no stranger to paying tribute to the legend.

“On Jan. 1 each year in New Orleans at the Kerry Irish Pub there is a remembrance of Hank,” she said. “Musicians all get together to sing their favorite Hank songs. Anywhere else it would be called a Hank Williams tribute, but in New Orleans they call it “Hank Rise” — lifting up the spirit of Hank with his songs. Hank certainly lives on in his wonderful songs that he’s given us.”

Along with Moore, Carson and Gilley, who was named Best Male Vocalist of the Year at the Country Music Awards in 1976, artists such as The LACS, Scott Brantley, Jett Williams, Brad Magness, Mary McDonald, Colon Leatherwood and Butler County’s own Southern Legends performed at the festival.