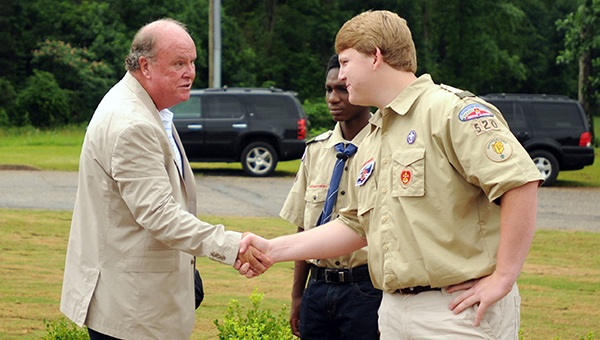 Boy Scout Warren Matthews, right, receives a handshake and a thank you from Greenville Mayor Dexter McLendon, left, during Monday’s dedication ceremony of Stephenson Park. Matthews spearheaded the effort to revamp the park, which is found at the entrance of the Greenville YMCA. (Advocate Staff/Andy Brown)

When Warren Matthews was looking for a fitting project to earn his Eagle Scout rank, he didn’t have to look far.

The rising junior at Woodberry Forest School in Orange, Va., has spent quite a bit of time on the tennis courts and in the weight room at the Greenville YMCA.

Over the years, he had noticed that the small park at the entrance of the facility had begun to lose its luster.

“The park used to be pretty, but eventually all the trees came down and it ended up being just a big dirt pile,” Matthews said.

In need of an Eagle Scout project, Matthews’ father suggested he tackle revamping the park.

Matthews met with Mayor Dexter McLendon and discussed partnering with the city to enhance the park.

After receiving approval for the project from the city and the Boy Scouts, Matthews went to work raising funds. He raised more than $8,500 from contributions from family and friends to help fund the project, which in total cost approximately $13,000.

“We sent out letters in a newsletter format to as many people as we could just asking for whatever they could do to help,” he said. “Eventually we got the money up. The city met half the cost, which was very important. That allowed us to put in everything we wanted to put in.”

The project took two years to complete. A dedication ceremony was held Monday, and even a light rain couldn’t dampen the spirits of those in attendance.

“It’s exciting to have it done finally,” Matthews said.

The new park, which is circular in shape, features four picnic tables, a flag pole that is lit to allow the American flag to fly day and night, sidewalks leading to the center of the park and a new wooden sign. 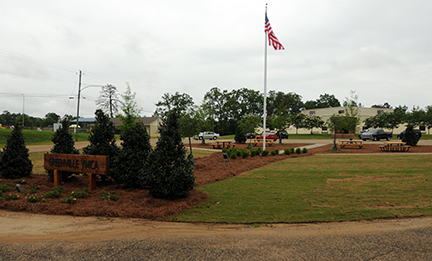 Stephenson Park, which is circular in shape, features four picnic tables, a flag pole that is lit to allow the American flag to fly day and night, sidewalks leading to the center of the park and a new wooden sign. (Advocate Staff/Andy Brown)

“It looked so bad out here before we started, that I think anything would have been great, but this is absolutely wonderful,” he said.

“It’s so great to see when public and private come together to do something like this. This is what we talk about all the time — everybody working together and getting along with one another.  It’s so important to do this.”

Both McLendon and Matthews praised city horticulturist Jennifer Stringer for her efforts in beautifying the park.

Matthews said he hopes the new park will reflect positively on the Camellia City.

“I feel like we’ve made a change in the outlook of our whole YMCA,” he said. “I think it looks a lot better, and I think when visitors come it will definitely promote Greenville in a nice way and that’s important to me.”

McLendon believes it will and said the new park is just a piece of what the city plans to develop around the YMCA.

“The Y is such an important part of our city,” he said. “We own land all around the YMCA and the tennis courts, and our long range plan, as we find more money, is to have walking trails and a dog park and different things out here because this is where we want everybody — all parts of town — to come and be a part of our recreation program and the YMCA.”

Matthews also had a surprise for one special guest in attendance.

Allen Stephenson, a longtime supporter of the YMCA, was on hand for the dedication. Little did he know the park would be named Stephenson Park in his honor.

“We came up with the idea of naming it for him, and we wanted it to be a surprise, and he was the right choice,” Matthews said.

Stephenson said the city benefits from its partnership with the YMCA, and the new park will help the YMCA better serve the community.

“This was all a dream at one time,” Stephenson said of the YMCA. “Our city is a much better place because of this. When people come to look at living here, this is a great asset and this (park) is just a tremendous addition.”

Matthews, who is currently a Life Scout with Troop 520, said the new park also serves as reminder that anything is possible with hard work.

“Anybody can do anything they want to do,” he said.

Matthews, who joined the Boys Scouts six years ago, is one step closer to achieving his goal of becoming an Eagle Scout.

Eagle Scout is the highest rank in Boy Scouts. Earning the rank of Eagle Scout requires a progression through the Boy Scouts of America ranks of advancement, earning a minimum of 21 merit badges (13 that are required), serving in a position of responsibility for the troop, and planning, developing and providing leadership for a service project.

The scout must then pass a Scoutmaster’s conference and an Eagle Board of Review. Once all are completed successfully, he earns the rank of Eagle. Achievement of the Eagle rank is rare, with less than 5 percent of all registered Scouts achieving the rank, according to the Boy Scouts of America.

Matthews still has to pass his Eagle Board of Review to earn the rank of Eagle Scout, but he’s confident he’ll do so.

“We’re going to get it done,” he said with a smile.