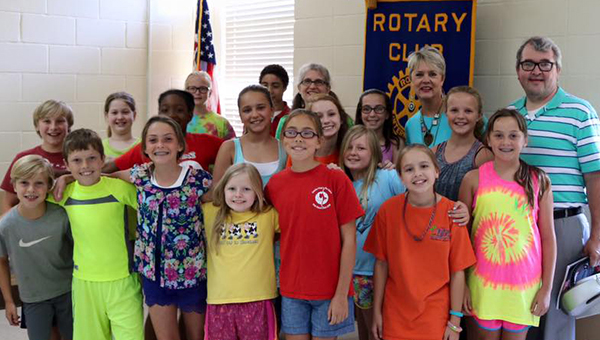 Cast members from the Greenville Area Arts Council’s upcoming production of “Annie Jr.” performed for the Rotary Club of Greenville Thursday during the club’s weekly meeting at Beeland Park. The show opens June 10 at the histotic Ritz Theatre in downtown Greenville. Tickets are $10. (Courtesy photo)

The sun’ll come out tomorrow — or at least next weekend — when as “Annie Jr.” takes center stage at Greenville’s historic Ritz Theatre.

Directed by the Greenville Area Arts Council’s Nancy Idland, “Annie Jr.” features a cast of mostly fifth through eighth graders, many of whom have performed with the Ritz Players in the GAAC’s annual production of Putting on the Ritz.

“One reason we chose this play is that we had a beautiful bevy of talented girls,” Idland said. “It was just the perfect timing for ‘Annie’ because we had all if our orphans in place, and I knew we had to do it before they got much taller. Otherwise we’d have some lady orphans in there and it just really wouldn’t work.”

This musical based on “Little Orphan Annie” features the redhead Annie as she finds a new home with billionaire Oliver Warbucks, his secretary Grace Grace Farrell and a lovable mutt named Sandy.

Annie is determined to find the parents who abandoned her years ago on the doorstep of an orphanage run by the heartless Miss Hannigan. With eternal optimism and the help of her dear friends, Annie escapes to New York City and finds a new home and happiness with Daddy Warbucks.

Kalee Russell, a veteran performer with the GAAC, stars as Annie.

“It’s fun,” Russell said of preparing for the show. “The best part is learning to do everything.”

Idland praised Russell, along with her fellow cast members, for their hard work in preparing for the show.

“All the kids have done a fabulous job,” she said. “Learning all these lines isn’t easy and they have done a great job of it.”

Katelyn Stinson, who will portray Grace Farrell, said building relationships with the other cast members is a big part of what makes performing so much fun.

“I like meeting new people,” s he said. “Each year I’ve made new friends. I like the choreography, even though I can’t dance, and the singing.”

Tickets for the show can be purchased at The Pineapple for $10 or at the door the night of the performance.

“Reagan McClain (who plays Rooster Hannigan) is adorable,” she said. “It’s worth the price of the ticket to come hear him do his country boy accent.”