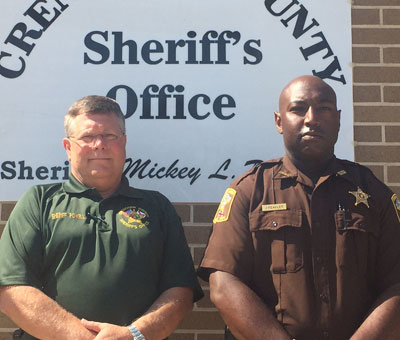 Georgiana native Jeremy Peagler (right) reported for his first day on the job as a new deputy for the Crenshaw County Sheriff’s Office on Tuesday. Peagler is the first African American deputy to be hired in the past 10 years. (Photo by Beth Hyatt)

Tuesday morning marked the first day on the job for the newest member of the Crenshaw County Sheriff’s Office. Jeremy Peagler, Georgiana native, will now serve as the the first African American deputy to be hired in the past 10 years.
“This is something I’ve been wanting to do for a long time is hire an African American deputy, but no one was really getting into law enforcement,” said Crenshaw County Sheriff Mickey Powell.
“We’re fortunate to get Jeremy.”
While Peagler is still getting used to Crenshaw County, he is no stranger to the small town life. Born and raised in Georgiana, Peagler began working in the lumber business straight out of high school. Having always had an interest in police work, Peagler started pursuing this desire after seeing job postings for his area. Peagler attended the Montgomery Police Academy in 2013 and after began working with the Georgiana Police Department for the next three years.
Peagler is excited about his move to Crenshaw County, and is ready to see what the job has in store for him.
“I was looking for a different atmosphere, so I talked to the sheriff here. He gave me this opportunity, and I’m thankful for it,” Peagler said.
“I think it’s going to be a great transition. I haven’t been around much, but I’m exited about it and at the same time a little nervous. I’m ready to see where this takes me.”
Powell says that throughout the next few weeks, Peagler will continue shadowing veteran officers to learn the proper methods and rules of the job.
It is Powell’s desire to give Peagler every opportunity to learn the roads and back roads, proper paperwork procedures and regulations before he embarks on his patrol to ensure he is ready to face whatever comes his way.
“He has a lot to learn and there’s something to do all the time,” Powell said.
“I really like him, he’s old enough that he’s settled down and he can hit the ground running. He’s going to be a big blessing for us.”