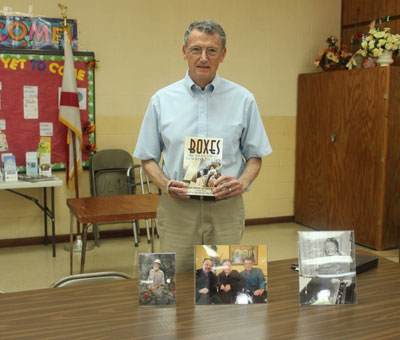 In this second edition of his novel, Mark Musick reveals the true but unbelievable story of Howard Hughes and his time spent in Alabama. (Photo by Shayla Terry)

People often ponder what they would do if they had a million bucks. Billionaire Howard Hughes bought a new life.
Author Mark Musick stopped in Luverne to present the second edition of his book “Boxes: the Secret Life of Howard Hughes” last Thursday.
“Everything was accurate in the first book,” Musick said.
“We just found that there was much more to the story.”
“Boxes” tells of Hughes’ alternate life as Nik Nicely- a reclusive man living with his devoted wife in various locations in Alabama. The billionaire Hughes died in 1976. Yet, Nicely lived to be 96 years old, dying in November 2001.
Musick became acquainted with Nicely’s wife, Eva McLelland, when she called his office to ask for a favor. McLelland and Musick kept in contact through the years. They officially met in January of 2002.
“I think she trusted me because I helped her” Musick said.
Eventually, McLelland revealed to Musick the truth about her husband and the life that they had lived.
“The first four years I dealt with Eva, I didn’t know whether to believe any of it,” Musick said.
“But all of the documentation turned out to be truth.”
Musick and his co-author, Douglas Wellman, worked with McLelland to pen “Boxes”. McLellland also requested that the book not be released until after her death.
“She wanted the book to be named boxes because that’s what she live out of,” Musick said.
“He never let her unpack.”
During their marriage, McLelland and Nicley lived in various places throughout Alabama, one of them being a red house on Highway 29 in Goshen, Ala. in 1974.
Glenwood resident, Tommy Hall, recalled when the couple rented his grandparent’s house.
“They stayed there for about three months,” Hall said.
“I think it’s a fascinating story, and I believe it entirely.”
The first edition of “Boxes” took eight years to complete. The second edition features more information and interviews with people who met Nik Nicely. It also features interviews with alleged children of Hughes.
Musick said he always enjoys doing the presentations. He has gotten many great things from telling this story, like Nik Nicely’s ashes and many boxes like McLelland.
“We’re telling a story that’s the truth,” Musick said.
“History in many cases just is not the truth.”
“Boxes: the Secret life of Howard Hughes” the second edition can be purchased on Amazon.com.