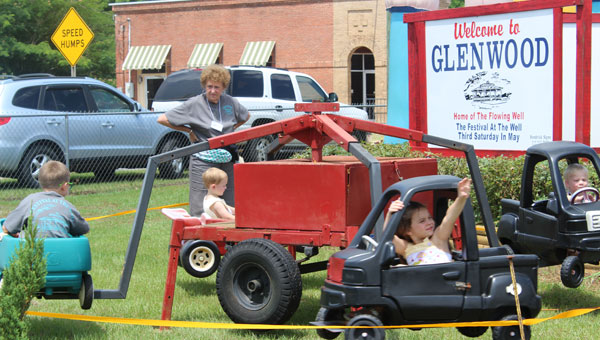 The annual Glenwood Festival at the Well offers many different activities that the whole family can enjoy. (Photo by Shayla Terry)

The town of Glenwood kicked off its 23rd annual Festival at the Well on Saturday morning. The festival is an all day event that celebrates the township and it’s antique well that flows at the town’s center.

The Flowing Well Foundation Board awarded 14 scholarships at Saturday’s festival, and chairman Wayne Gibson said next year they hope to do more.

The festival began with a parade and closed Saturday night with a street dance. The opening ceremony featured a welcome from Mayor Pro Tem Billy W. Knight and a prayer by pastor Danielle May of Glenwood United Methodist Church.

This year, 14 students were awarded $500 scholarships.

“In order to receive our scholarship, students have to have roots in Glenwood,” said Gibson.

“They don’t have to be from here, but they must have parents or grandparents that are.”

Proceeds from the festival are used to fund the scholarship program.

The “Miss” Festival at the Well Pageant has been a long-standing event at the festival. This year the pageant saw over 20 entries from ages three months to 12 years old.

“This year was a good turn out,” said pageant coordinator Sherry McSwean.

“All the girls look beautiful, and we had fun.”

The whole town comes together to orchestrate the festival, and the Glenwood Volunteer Fire Department plays a big role in the festival. In conjunction with the Well Board, they provide food and beverages for sale. BBQ was made and served by the department’s own firefighters.

“We’ve been doing our part in the festival, I know for at least 15 years,” said fire department chief Scott Strickland.

“All of the funds we make goes right back to the fire department for our needs.”

Festival goers were entertained throughout the day with live music, dance and storytelling. Vendors from all over South Alabama attended the festival. Many vendors, like Mary Johnson of Country Designs, have attended for multiple years.

“We do well here, it’s our second year,” Johnson said.

“We would definitely be back.”

Gibson says the festival will return next year.

“We hope we get enough funding to award out even more scholarships,” Gibson said.