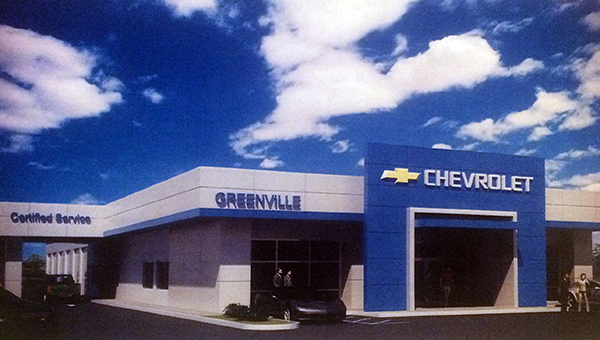 Greenville Motor Company relocated to the Camellia City from Fort Deposit in 2000. In 2005, the dealership underwent an expansion that doubled its showroom, sales and managerial areas. Thanks in part to a deal with the City of Greenville, the dealership will soon undergo a nearly $350,000 remodeling project. Pictured is an artist rendering of what the upgraded dealership will look like. (Courtesy image)

Greenville Motor Company will soon have a new look, thanks in part to a deal with the City of Greenville.

On Monday night, the Greenville City Council approved a 10-year tax rebate for Greenville Motor Company to assists with the dealership’s plans to remodel its facility.

There were would be no rebate on the portion of taxes collected for the school system and the rebate is capped at $345,187.

Greenville Mayor Dexter McLendon said he came up with the structure of the deal after reading about a similar approach taken in Prattville between the city and Long-Lewis Ford.

“I read about the deal in Prattville online, and I called (Greenville Motor Company owner) Charles (Haigler) up and told him I didn’t see why we couldn’t do the same thing,” McLendon said. “Greenville Motor Company has been a part of our community for a long time and has been very involved, and we wanted to find a way to help them offset some of the cost of making the upgrades to their facility.”

McLendon said that since the taxes for the school system will not be rebated and the city will retain the portion of the taxes it was already receiving, everyone benefits from the deal, including Greenville Motor Company.

“It’s not like we are giving anything up that we were already getting,” he said. “It’s a motivation for them to sell more, and they feel that these upgrades will help them increase their business, which will generate additional funds for the schools. It’s not giving anything away. It’s just looking at the future. We’ll still be increasing our base, but it’s an opportunity to help them stay here and run this kind of business, which they have been successful at for many years. Greenville Motor Company is as asset to Greenville and we’re happy to help.”

Greenville Motor Company relocated to the Camellia City from Fort Deposit in 2000. In 2005, the dealership underwent an expansion that doubled its showroom, sales and managerial areas.