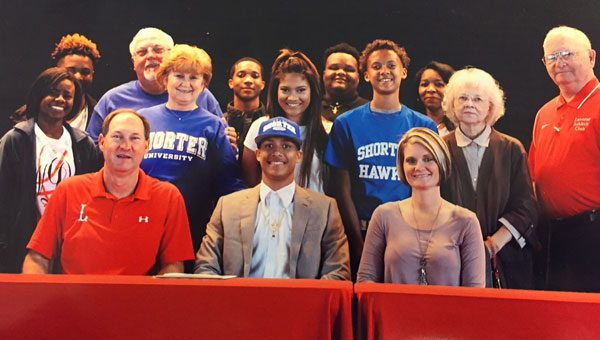 “Shorter had a very good family environment, good coaching staff and they made me feel very welcomed. It felt more like home than anywhere else,” Bryant said.

While Bryant has not always been a Luverne Tiger, it did not take him long to fit into the family after coming to LHS in the second grade.

Since then, Bryant has made himself a well-rounded sportsman by participating in numerous sports, such as baseball, basketball and football. In his senior year, he could proudly be seen on the basketball court and the football field, while giving baseball a rest.

Coach Scott Rials has been a part of the Tiger family for a year now, and has had the opportunity to see Bryant grow in his athletic career. According to Rials, Bryant not only served as the offensive captain this past year, but was also considered the MVP of the team.

“He’s a really great talent and has a good upside. He can run, he’s tough and he has some good skills,” Rials said.

“He’s a very smart kid. We’re delighted that he has the opportunity to move on and further his education and athletics.”

Rials believes that Shorter is a perfect fit for Bryant not only because of its atmosphere and athletic program, but also because of its proximity to home.

“I think for him it’s good to be not too close, but not so far away that people can’t see you play,” Rials said.

“I think it’s a good fit for him, and if Austin will get up there and apply himself like I know he’s capable of, he’ll be a great player for them. I always tell them, you can be anything you want to be. You just have to set your mind to it.”

Throughout his years at LHS, Bryant has had many mentors, especially coaches, who have influenced him along that way and helped prepare him for his future goals. He also cherishes the many memories he’s made over the years, with one in particular standing out: “Beating Brantley.”

With his high school career coming to a close, Bryant now looks to the future and holds to the lessons he’s learned from his teachers and coaches.

“The coaches guided us to the right place and the right path. I’m excited to get to see how college life is. Go Tigers,” Bryant said.

Some low-income and elderly Alabama residents who need help reducing their utility bills will get assistance from the state, thanks... read more