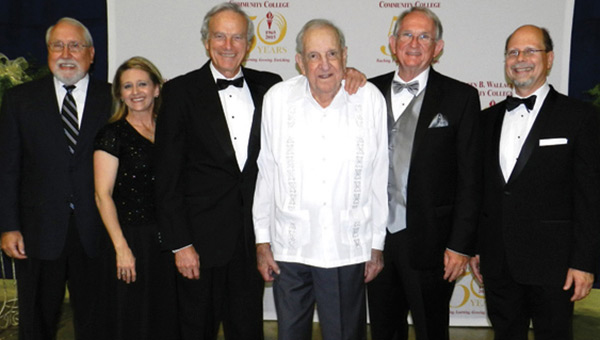 Dr. W.H. McWhorter served 22 years as president of the college.

In September 1969, the college opened under his direction in the Bethune School, a temporary location leased from the Covington County Board of Education.

“It was very meaningful that he was able to participate in the college’s 50th anniversary gala celebration last year,” Riedel said. “He was a great leader for this college and will be remembered fondly. I feel very fortunate to have had the opportunity to know him.”

Seth Hammett, who was named LBWCC president after McWhorter, called him a great man and a great mentor.

“I learned a lot from Bill McWhorter, and admired him greatly,” Hammett said. “It was a true honor for me to follow him as president. He had a big heart, and his mind was expansive in that he understood the value of all aspects of education. He was firm believer in the arts, and made sure there was an arts program, not just for the college but the community.”

“He was able to convince Solon and Martha Dixon to spend the money to pay for half of the performing arts center, at the time, the largest cash gift to the Alabama Board of Education of any in the state.”

“He meant more to the broader Andalusia community than almost anybody that you know,” Hammett said. “He made a real difference; started and in good order. It was my honor to follow him.”

Hammett said it was McWhorter’s idea to start the college’s foundation.

A building on campus is also named in his honor.

He resided in Gainesville, Fla.

The Greenville-Butler County Public Library will be closed May 23 through May 31 for staff and city employees to prepare... read more