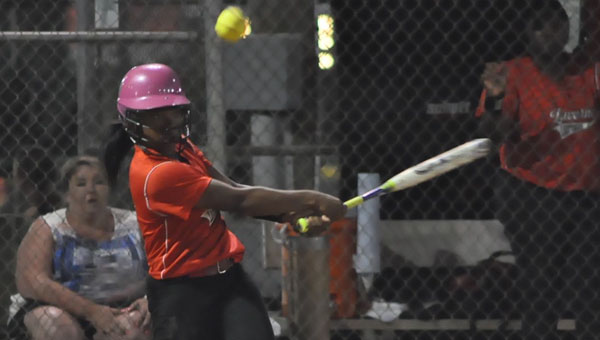 J’asha Mitchell takes her turn at the plate and succeeds in making a hit for the LHS Lady Tigers.

After a season of preparation, the Luverne High School Lady Tigers had the chance to compete in the Girls 2A 2016 South Central Regional Softball Tournament this past week. The Lady Tigers played three rounds and faced Holy Spirit Catholic, Horseshoe Bend and Reeltown.

“A lot of our girls are new to softball period. A lot of them have either never played or are just now coming back to the game. From where we started to where we are when we finished, it’s really something to be proud of.”

In an impressive display of play, the Lady Tigers took the opening game against Holy Spirit Catholic with a sweeping 12-1 victory.

Senior Nyjah Thomas went three for five batting, and had six RBIs highlighted by a bases clearing hit in the top of the seventh, which put the game seemingly out of reach.

Jones fittingly snagged the final out sealing the victory for the young by talented Lady Tigers.

In the second round of the tournament, the Lady Tigers faced off against Horseshoe Bend, and suffered a crushing defeat of 10-0.

“We played Horseshoe Bend and they had a really talented pitcher, and she threw it a little hard to us. It was one of those things, a time issue,” Easterling said.

“We haven’t seen a lot of pitchers throw that hard.”

Coming into their third and final round of the tournament, the Lady Tigers were down but not out as they prepared to take on Reeltown.

Though the team fought valiantly and put themselves on the board, the Lady Tigers still walked away with a 13-3 loss.

Reeltown led the game 6-0 until the fourth inning, when the Lady Tigers found their spark and pushed the score up to 6-3.

“When we played Reeltown, they threw a younger pitcher. We had some issues at the beginning, but started settling into the game,” Easterling said.

“Then they swapped pitchers and brought in an older one. When you change speeds, it’s a tremendous timing issue. But, it is what it is. We’re young, but the foundation is set.”

Even though the team is made up of younger players, Easterling was proud of the effort they put in throughout the season, and looks forward to the coming years. He hopes to continue to grow the program and build up the talent of these young ladies.

It is Easterling’s hope that he and the staff at LHS will be able to continue to grow their women’s athletic organizations and go farther than they ever have before.

“I’m not here just to put a team out there. We want to be successful; we want to win. We’re not happy with a 12-12 record,” Easterling said.

“We’re making some changes to the culture here. Now the competitive character is coming back, and we’re competing at a high level. We’ll be there. It’s just going to take time.”

Brantley falls to Blacksher in playoffs

SPECIAL TO THE JOURNAL: KATIE SILVA After months of rigorous training, the Brantley Bulldogs competed in the Final Four round... read more