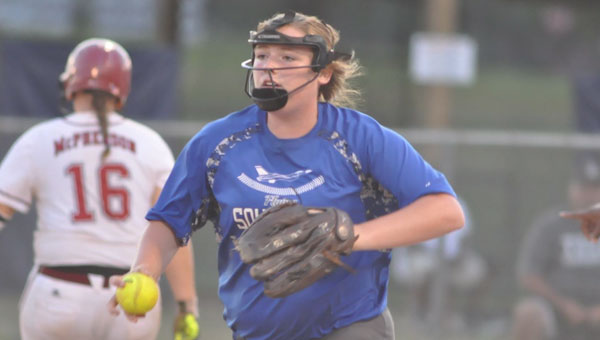 With the softball season now at a close for the Highland Home School Lady Squadron, the group now reflects on their successes throughout the season. After competing in the Girls 2A 2016 South Central Regional Softball Tournament this past week, the Lady Squadron walked away from their season boasting a 17-11 record.

In the first round of the tournament, the Lady Squadron battled it out against Pickens County in a nail-biting battle that ended with HHS taking the lead 8-7.

“We went ahead on them in the first inning, it was two to nothing. Then we went up four to two, and it was cat and mouse the whole time,” said Cassie Smith, Lady Squadron softball coach.

“We went into the seventh inning tied.”

Gracie Whiddon and Katelyn Sport combined for the win. Maalaysia Johnson, Harleigh Taylor, Allera June and Toni Edwards each had an RBI, and Lakeia June had three RBIs.

In the second round, HHS faced off against New Brockton, but sadly tasted a crushing 16-0 defeat.

“We knew it would be tough going in it; we knew they would be the team to beat overall,” Smith said.

Allera June had two hits and Sport and Taylor had one each. Sport stood strong on the mound throughout the entirety of the game. 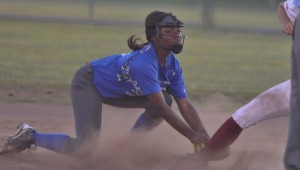 Lady Squadron junior Allera June reaches to tag a runner out on second.

Going into their third and final round, the Lady Squadron took the field to tackle Zion Chapel. The Lady Squadron was dealt a defeating blow of 10-0, but not without giving it their all one last time.

“We waited too long to finally make our adjustments. We had errors in the field, and again things just didn’t go our way,” Smith said.

“Overall, I’m proud of the girls. We had a great year winning area and everything.”

Smith has been impressed with this group of players, especially since the team consists mainly of young players. The team housed two seniors, three freshmen and one seventh grader starting in the field this year, and Smith is excited to see these remaining players grow and train for next year.

“I think if we can continue to build each year, I have no doubt in my mind that we’ll go back to regionals next year,” Smith said.

“I feel really confident though. I’m proud of these girls and where the program is going here at Highland Home. I feel like we have a bright future. We’ll keep getting better and getting stronger.”

The HHS Flying Squadron and Lady Squadron will drop to division 1A next year and will then fall into the same area as Brantley High School.