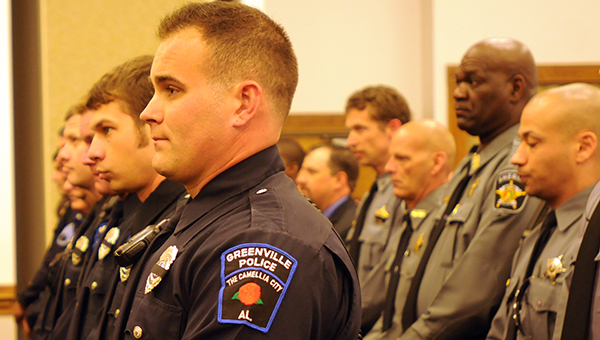 When a law enforcement officer leaves home for work, he says farewell to his family, knowing it may be a final farewell.

It’s been that way since the very first police officer pinned on a badge.

But in recent years, an already dangerous job has become more dangerous, according to Greenville Police Chief Lonzo Ingram.

“We’ve been in a climate here recently unlike anything I’ve ever seen,” said Ingram. “I’ve been doing this a long time, but I’ve never seen anything like what we’re seeing now. People are using apps on their phones to find police officers and assassinate them like they did in New York not long ago. It’s unreal what police officers are going through in this day and time, but I’ve always believed that things are like a pendulum. They swing one way and then back the other. If we can just ride it out, I feel sure that common sense and reason will take back over in places like Washington D.C. and New York and everything will be fine.”

On Wednesday, the Greenville Police Department honored those officers that didn’t make it home during its annual memorial service at the Wendell Mitchell Conference Center on the campus of LBW.

Since 1904, four Greenville Police officers have been killed in the line of duty.

The Butler County Sheriff’s Office has also lost four deputies in the line of duty. They too were honored on Wednesday.

“It’s important that we come together every year and call these names to remember the sacrifice of these men,” Ingram said.

“Law enforcement officers have opportunities to help people, and that’s what you do,” Tesmer said. “Our sons, our daughter, our husbands, our wives, our parents they are out there in the public and we depend on you to keep them safe. We appreciate you doing that.”