GHS senior marching on to Bama 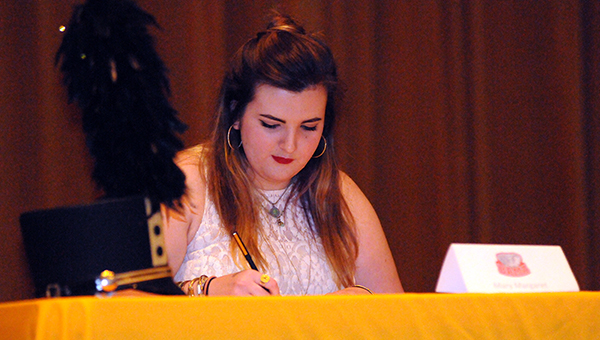 That’s because the soon-to-be Greenville High School graduate signed a scholarship making her one of the newest members of the University of Alabama’s Million Dollar Band.

LeCoq, who served as drum major for the Tiger Pride Marching Band for the past two years, chose Alabama over LSU.

“It’s starting to hit me that this is reality,” LeCoq said with a smile after a signing ceremony held in Greenville High School’s auditorium in front of family members and fellow band members.

LeCoq said performing in the band at GHS has prepared her to take this next step.

“It was an awesome experience to be able to be in the band because it opened my eyes to all these different ways to share my music and give back to the community with those skills,” she said. “It was a great opportunity.”

LeCoq plans to major in music at Alabama.

GHS Band Director Brett Johnson said he is thrilled that LeCoq will have the chance to further her education and continue performing.

“Mary Margaret is an incredible student,” said Johnson. “She has worked so hard to pursue her love of music, and I’m glad to see all the hard work come to a happy ending.”

“She’s done some pretty incredible things in her time in the band at Greenville High School,” Johnson said.

LeCoq has been a member of the band since fifth grade and has been in the marching band since she was in seventh grade.

“Her musicianship will be greatly missed here at Greenville High School, but she laid the foundation down for others to follow in her footsteps,” Johnson said.

As a senior, LeCoq served as the Tri-M Music Honor Society president at GHS during her senior year.