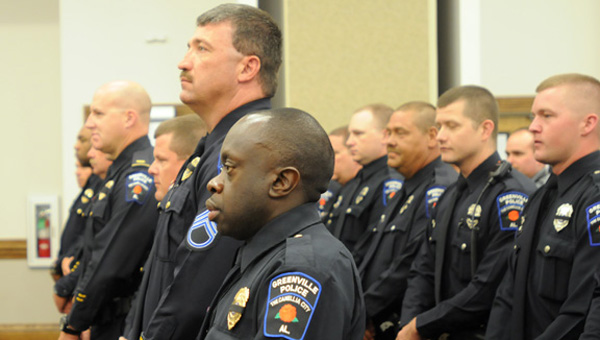 Four Greenville Police officers have been killed in the line of duty.

On Wednesday, the Greenville Department will honor their sacrifice at its annual memorial service.

“It’s important that we remember these officers and take time each year to call their names,” said Chief Lonzo Ingram. “We want to keep their memory alive.”

The Butler County Sheriff’s Office will also honor its three fallen deputies during the memorial service.

In year’s past, the GPD has honored officers George Bryan, Joe Herring and Gary Wayne Heath. This year it will also honor officers W.G. Daniel, who was killed in the line of duty in 1916.

“We found about two months ago that he had been killed in the line of duty, and we want to make sure that we honor his sacrifice,” said Ingram.

Along with recognizing the officers that “made the ultimate sacrifice,” the ceremony will also offer an opportunity to recognize the service of the department’s current officers, according to Ingram.

The GPD will also present its Officer of the Year award, which is sponsored by Sam and Coral Roberts, and the Gary Wayne Heath Education and Training Award, which is presented to an officer that is pursuing higher education or additional training. That award is sponsored by Camellia Communications.

The BCSO will also recognize its Deputy of the Year.

Butler County District Attorney Charlotte Tesmer will serve as the keynote speaker at the service.

Tesmer was appointed by Gov. Robert Bentley in March of 2012 to fill the remaining five years on the unexpired term of John Andrews following his retirement. In November, Tesmer announced she plans to seek a second term in office.

Greenville City Councilman Tommy Ryan will sing at the service.

The memorial service will be held at 11 a.m. at the Wendell Mitchell Conference Center on the campus of LBW Community College. A reception will be held following the service.