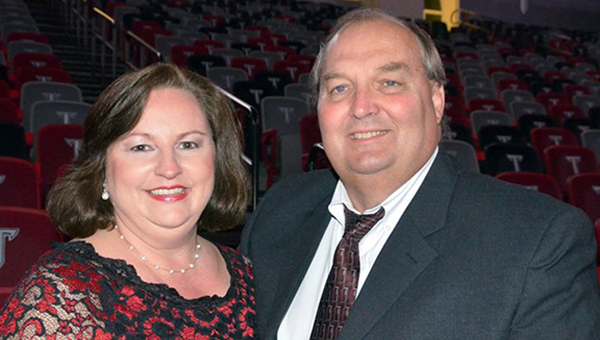 Friends and family of Ken Gibson gathered Monday to say farewell to the longtime businessman who passed away suddenly on April 29. Gibson is pictured with his wife, Pat Gibson. (Courtesy Photo)

A prominent local businessman and the longtime former “Voice of the Eagles” at Fort Dale Academy has fallen silent.

Gibson, general manager at Greenville Chevrolet, was warmly remembered by those who officiated at his services, held at First Baptist Church in Greenville on Monday.

“We are truly saddened by the loss of Ken Gibson,” said longtime family friend Jay Rice. “He was a good man willing to go the extra mile, a good father to his children, and a good friend to the community.”

Rice remembered Gibson as tireless supporter of Troy University, Fort Dale Academy and local organizations. He also recalled a loving dad there for children Hope and Kendall — for their birthdays, ballgames, recitals and even to help with homework.

Gibson, a Fort Deposit native, attended Fort Deposit Academy through the 10th grade before transferring to Fort Dale Academy for his junior and senior years.

Gibson’s love for the gridiron was displayed in his dedication to the Eagles as a standout student-athlete, where he was named team captain, MVP and Alabama Private School Association All-Star, earning a football scholarship to Northwest Mississippi Community College.

Later, Gibson would proudly cheer on his son, Kendall, a Fort Dale Eagle football player who went on to play for the Troy Trojans. Gibson also served as public address announcer for 16 seasons of Eagles’ games.

“He truly loved Fort Dale,” said Rice. “He was on the school’s board and was so proud when both he and his son were inducted into FDA’s Hall of Fame.”

Gibson and his family were steadfast attendees at Troy athletic events during Kendall’s five years on the team and during his time serving as a graduate assistant coach.

Longtime Troy football coach Larry Blakeney recalled Gibson as “a true Trojan” who loved tailgating and had one of the best attendance records of any Trojan fan.

“He always showed up . . . not just football, but other sports and other events at Troy. We suffered losses and celebrated victories together,” Blakeney said.

“If we all had the same effect (that Ken had) on others at our high school, college or university — I tell you, we wouldn’t have a problem.”

Gibson was not only a true Trojan, “he was a true Eagle,” said FDA’s Daniel Autrey.

Autrey, who spoke of feeling “old, angry, sad and inadequate” upon learning of his friend’s untimely passing, reminded those in attendance to believe and trust in God and to thank Him for Gibson’s presence in their lives.

“How do you measure the value of a man’s life, or judge their significance?” said Autrey. “Sometimes that impact is only felt years later. Look around at the people here today — Ken’s family, his GM family, Zoo Daddy Hunting Club friends, Eagle and Trojan families and community members — all impacted by him.”

Autrey remembered Gibson as a man who genuinely loved his work managing the Chevrolet dealership, a business that he joined 35 years ago when it was still located in Fort Deposit.

“Working there was like a hobby for him. I know Charles (Haigler) will miss his partner and good friend. But I also know he has many very good memories,” said Autrey.

“We were best friends and we worked together for a long time,” Haigler said. “I will miss him.”

First and foremost, Gibson was a man dedicated to family, Autrey recalled.

“His wife Pat was so often at his side. It was a good marriage. And he loved his kids unconditionally, no matter what they did,” said Autrey, adding, “That didn’t mean he always took their side. He took the coach’s or the headmaster’s side when they’d misbehaved.”

Autrey reminisced about a time when Gibson had a photo of Autrey’s son on the pitcher’s mound enlarged and sent to him, “just because he knew we’d appreciate it . . . he was a sweet, thoughtful person.”

“When you were hurting or struggling, somehow he could sense it and didn’t just ask if he could help. He took action,” Autrey said.

“He did good to an extent we will never know.”

Autrey believes that Gibson and his longtime friend and fellow Troy supporter Jimmy Gardner are now in heaven together, smiling down at us.

“And they are telling us not to be afraid.”