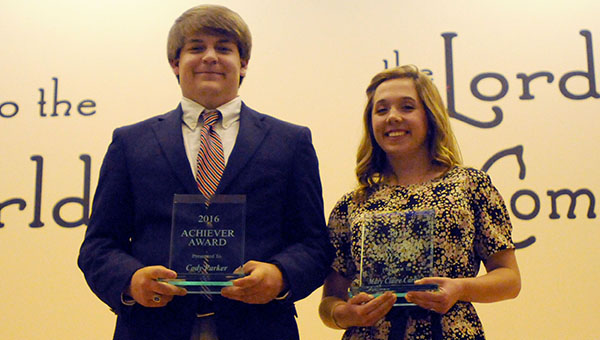 By doing so, she earned the top honor in the county for a student-athlete.

As the recipients, both Carlton and Parker received $3,000 scholarships to be used at the college or university of their choice.

“I know that every individual that was nominated for this award is running the race that God has set before them with all the emotions they have in their heart, and that’s why it is such an honor to have received this award,” said Carlton. “One of the questions they asked me during my interview was, ‘Mary Claire, what motivates you?’ I thought about it because that’s a really deep question. I told them, ‘Well, every day that I wake up and see the sun rise, I know it’s a day that God has set before me to love, learn and run the race set before me with all the strength that I have.’ I just want to thank my family for motivating me to do that. It just means so much.”

Carlton has played volleyball, basketball, tennis and soccer during her time at Fort Dale. She’s president of the school’s Beta Club, vice president of the National Honor Society, a member of Mu Alpha Theta and the Key Club. She’s also the valedictorian of the Class of 2016.

Carlton is a member of Fort Deposit United Methodist Church where she helps lead youth services. She is also active in the church’s efforts with Operation Christmas Child.

Like Carlton, Parker said he is honored to be selected as this year’s award recipient, and acknowledged that it wouldn’t have been possible without the help of others.

Parker lettered in football, baseball and basketball at Fort Dale for four years.

Parker is a member of St. Thomas Episcopal Church where he has served as an acolyte for five years.