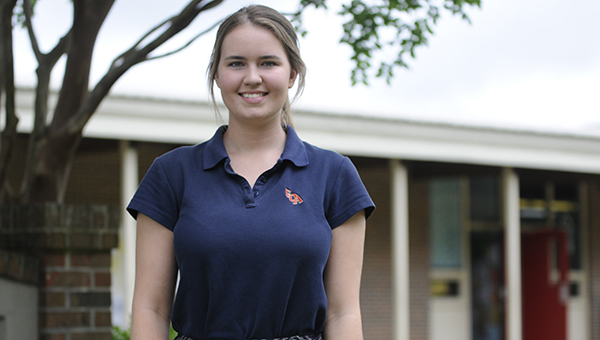 Fort Dale Academy senior Rachel Jackson was selected as a semifinalist to advance to the final round of the 2016 U.S. Presidential Scholars competition. (Advocate Staff/Jonathan Bryant)

Jackson was selected as a semifinalist to advance to the final round of the 2016 U.S. Presidential Scholars competition.

More than 4,700 students were selected from a pool of nearly 3.3 million graduating high school seniors, and 689 semifinalists were chosen from across the country.

The U.S. Presidential Scholars Program, established in 1964, recognizes and honors the nation’s most distinguished graduating seniors.

In 1979, the program was extended to recognize students who demonstrate exceptional talent in the visual, creative and performing arts.

Last year, the program was extended once again to include students who demonstrate ability and accomplishment in career and technical education fields.

According to Fort Dale Academy headmaster David Brantley, Jackson exemplifies all of these qualities and more.

“We’re exceptionally proud of her,” Brantley said. “This accomplishment to be a semifinalist in this Presidential Scholars program is an honor—it honors her, but in my opinion it’s also an honor for our school. It validates what we’re doing.

“But she is an exceptional young lady in every way.  Her involvement in athletics—being an important part of the volleyball team and the soccer team is exceptional.  And I’ve seen her work countless hours tutoring younger students and even tutoring some of her peers.  I’ve seen her do this in the library hour after hour.  She is a pleasure to have as a student, she is a pleasure to be around and she is a dream student for teachers.  We’re so happy for her getting this recognition.”

Jackson scored the nomination thanks to her résumé, recommendation letters and a series of essays, in addition to her 31 ACT score and 1970 SAT score.

Despite her glowing qualifications, the news came as a surprise.

“I didn’t know about this program until I got the letter saying that I was a nominee, so I was very shocked and very honored,” Jackson said.

Though given Jackson’s daily responsibilities, it’s easy to see how she might’ve been preoccupied with other thoughts.

“Sports-wise, I play volleyball, soccer and I’m on the track team,” Jackson said.

“I’m in every academic club — National Honors Society, Mu Alpha Theta and Beta Club.  I’m in community service organizations like Key Club and ECHO.  I’m a part of the SGA.

In contrast to the laidback nature of the final semester for many graduating seniors, Jackson’s final days at Fort Dale are also probably her busiest.  The senior is prepping to enter Auburn University as an architecture major in the fall, and she’s laying the foundation for a successful first semester a few months early.

“School is probably harder than it’s ever been because finals are coming up, and you want to make great grades so that you can be exempt from exams,” Jackson said.

“Scholarship-wise, a lot of the deadlines have passed, but I’m still looking, because I’d like to get all of the scholarships that I can.  There are a lot of programs that Auburn offers that I’m focused on.  They have learning communities; I got offered to go to school a week early for specific calculus classes.”

But while Jackson is largely concerned with the future these days, the dwindling final days within the halls of Fort Dale Academy is also a time for reflection.

“I’ll definitely miss the close-knit community feeling here, because all of the teachers are here to help you,” Jackson said.

“Auburn will be very different, but I’m excited for it.”