A severe storm that passed through the area Wednesday afternoon left one downtown business temporarily out of commission after lightning struck a power pole next to the business.

The lightning strike occurred just before 5 p.m. and severed the power lines from the pole next to Sears, which left the store without power. 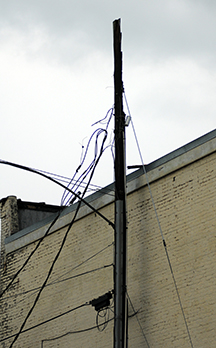 On Wednesday, lightning struck a power pole next to Sears and severed the power lines from the pole. (Advocate Staff/Andy Brown)

A bigger concern, however, was that following the strike the store was filled with smoke.

“There was some light smoke in building, possibly from the computers and other electronic equipment,” Greenville Fire Chief Chad Phillips said. “We performed a primary assessment of the interior to look for immediate threats. We then waited until Alabama Power got the power totally de-energized until we performed a secondary search throughout the building.”

Phillips said no hot spots were discovered in the store.

Firefighters were on the scene Thursday afternoon when power was restored to the store, and according to Phillips, no hot spots were found.

No new clues in search for teen