GHS grad to retire from Army

Sgt. First Class Israel Orthel Baugh didn’t plan to make a career out of his service in the U.S. Army.

“When I joined I planned on doing four years,” Baugh said.

When Baugh is finally discharged from the Army later this year, he will have completed 26 years of service. 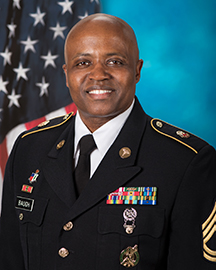 The 1990 Greenville High School graduate was honored with a retirement ceremony earlier this month.

“When I started, I didn’t think this would be a career for me,” he said. “It really all started the night of our graduation award ceremony. I was sitting there listening to my classmates get awards and have scholarships announced. I did well in high school. I graduated 10th in my class and did well on the ACT, but I didn’t have a full scholarship to college. I didn’t know exactly what I wanted to do, but I knew I needed to be doing something soon after graduation.”

Baugh’s father Willie, had served in the Army during Vietnam. Even though he rarely talked about his service, it played in a role in influencing his son’s decision to join the Army.

“After that awards ceremony, I called a recruiter and told him I wanted to join the Army,” Baugh said.

That call started Baugh on a path that has led him to bases in Germany, Texas, Washington, Kansas and Georgia.

The Greenville native, who has served an X-ray technician since joining the Army, is now preparing for the next phase of his life.

“I’m exploring my options now,” he said. “Where I end up depends on the job. I’m happy to stay here in Augusta, Ga., but I’ll move wherever a job leads me.”

Baugh is the son of Willie C. Baugh and Clarine Baugh.