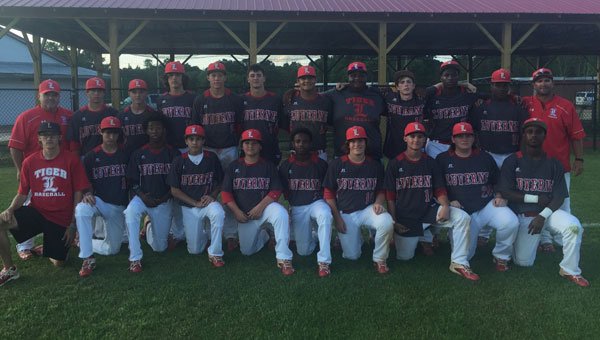 SPECIAL TO THE JOURNAL: JAMIE HOWARD

The young Luverne Tigers have been up and down all year. Coach Horn was quoted as saying ,“We are young, full of talent and most of all, we play hard, play together and with character.”

The young Tigers took on Elba Saturday, April 23 in Luverne for the first round of the playoffs. Elba got off to a great start jumping all over Luverne 5-0 in game one of two. After two innings it seemed like Elba would run away with game one.

The Tigers showed that heart and grit coach Horn spoke of come charging back. The tigers went up 9-7 heading to the top of the seventh but could not close the deal.

Elba scored two points in the seventh sending the game into four extra innings with Elba taking game one 11-9.

Game two was all Luverne. Sensing they had given one away, the Tigers jumped on Elba early behind the bat of Marquese Davison and the pitching arm of ninth grade sensation Tay Brantley.

Luverne went up 12-3 to take game two with a win of 12-7 after Elba added a few runs to make the score respectable.

Round three came Monday night on the field of the Tigers. Hunter Kendrick took the mound for the Tigers in an elimination game. After splitting two on Saturday, the Tigers came out flat until an offensive explosion in the third.

Trailing 7-3, Luverne put up nine runs in the third and added three more in the fourth behind the timely powerful hitting of Bryant Rushing, Davison and Antavious Brown.

Davidson stayed hot from the weekend after hitting a homerun to left field Saturday propelling the Tigers into Monday’s deciding game.

Coach Horn called a plethora of hit and run plays keeping Elba’s defense on its toes. Tenth grader T.J. Peagler added another run in the bottom of the sixth by ripping an RBI just missing the outstretched hands of Elba’s shortstop and third baseman, giving LHS a 16-10 lead with two innings left to play.

Kendrick settled in and retired the side quickly in the top of the fifth. Elba came storming back to cut the lead to one, but the Tigers proved to be too much in the end.

After a 16-15 nail biter, Luverne marches on to the second round of the playoffs to face New Brockton. The next round will take place on Friday at Luverne High School at 4:40 p.m. and 7:30 p.m.