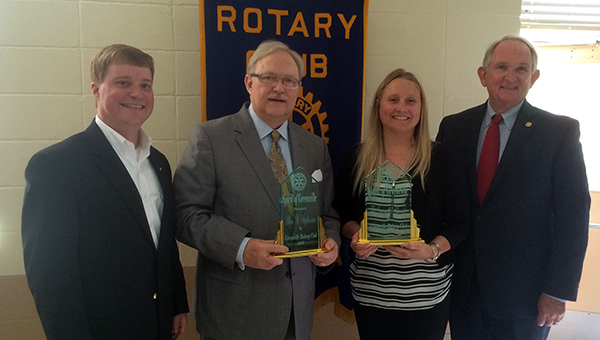 For Allen Stephenson, service is a way of life.

He’s proved it time and again through his many years as the county’s circuit clerk, pastor of area churches and through his involvement in numerous organizations throughout the county.

“I think God calls all of us to get involved in loving his children — all of us,” Stephenson said. “I’ve lived my life by this mantra, the only thing you get to take out of this world is what you give away. That’s your time, your love and your talents. Anything I am, it’s because God loved me.”

The Spirit of Greenville Award is the highest recognition given by the club to a non-Rotarian.

“It’s always a great day when we’re able to recognize people in our community for their service and give money to the Rotary Foundation, which does so much good around the world,” said Howard Meadows, president of the Rotary Club of Greenville. “Rotary’s motto is service above self, and both of these recipients have certainly exemplified that in the past and I know they will continue to do that in the future and inspire us to do the same.”

Stephenson served as Butler County’s circuit clerk for nearly two decades. He was first elected in 1994 and served three terms.

Stephenson chose not to seek re-election in order to focus his attention on pastoring First Baptist Church in Georgiana, where he has served since 2002.

Stephenson is the founder of the Back to School Bash, which is held annually in Georgiana. As a result of the event 1,500 students have made professions of faith.

“I certainly don’t feel worthy of this recognition,” Stephenson said. “I will tell you that anything that I am is a result of my wonderful wife and how much she has blessed me over the years. Being a pastor’s wife is not the easiest job in the world, and she has done it with such grace. It is she that has let me do some of the things I’ve been able to do to help.”

The Greenville Advocate, the first business ever presented the Spirit of Greenville Award, was founded more than 150 years ago by Gen. J.B. Stanley shortly after the end of the Civil War.

Stanley would go on to serve as the editor of the newspaper for 70 years, although just a year and half into its life, the Advocate’s future looked uncertain.

When the Advocate debuted, it did so as a daily paper.

For 18 months, J.B. Stanley published the newspaper each day delivering the news of Greenville and the surrounding area. However, it quickly became apparent that a daily model wasn’t going to last.

J.B. Stanley wisely made the switch to a weekly model. The change saved the Advocate, which quickly became known as one of the best weekly papers in the nation.

In 1883, the Advocate won the first prize of $100 and a gold medal at the Southern Exposition in Louisville, Ky., in 1883, as the best country weekly printed in the southeastern states. In 1931, the Advocate was awarded the Loving Cup as the best all-around weekly in Alabama.

In 1935, J.G. Stanley followed in his father’s footsteps as editor of the Advocate, while his brother Webb Stanley served as business manager.

J.G. Stanley held the position of editor for 32 years until his death. At that point, his son-in-law Gene Hardin took the reins of the newspaper. He served as editor for 27 years until the Advocate was sold to Boone Newspapers, Inc. in 1994.

Service has long been a hallmark of the Advocate and its staff. Current and past staff members have been actively involved in service organizations, such as Rotary, Kiwanis, the Camellia City Civitan Club and the Greenville Lions Club.

The Advocate also supports other organizations in the community, such as the Butler County School System, the Greenville Police Department, Safe Harbor, LBW Community College, L.V. Stabler Memorial Hospital’s Healthy Woman, the Greenville Area Chamber of Commerce and others.

“It’s amazing to look back at the places and things the Advocate has covered throughout its 150 years,” Advocate Publisher Tracy Salter said. “The Stanley family laid such a great foundation for us to be able to build on when Boone Newspapers purchased the Advocate, and they certainly deserve our thanks. We’re very thankful to Rotary for this honor.”

The very first Spirit of Greenville Award was presented to Hardin.

In honor of both Stephenson and The Greenville Advocate, the Rotary Club of Greenville donated $1,000 in each of their names to the Rotary Foundation, which is the charitable arm of the organization. Foundation grants empower Rotarians to approach challenges such as poverty, illiteracy and malnutrition with sustainable solutions that leave a lasting impact.