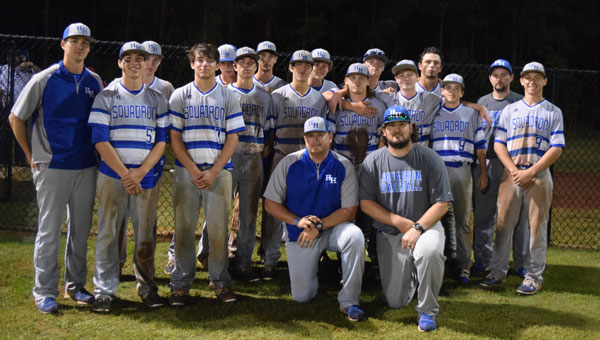 With the Highland Home Flying Squadron’s season behind them, they simultaneously look to the future, while still remembering the accomplishments of this year.

The Squadron recently went head-to-head against New Brockton in the playoffs, and while they fought valiantly, the battle went to New Brockton.

“Just like always, as a team they fought really hard. They never gave up and battled from beginning to end,” said varsity baseball coach Jonathan Jordan.

“I was really happy with these guys because we were ranked at the end before the final entries came out. We were ranked seventh. It meant a lot to the team, community and school, and they worked hard for that.”

In game one, the Squadron fell 4-5, but not without putting up a fight.

In the bottom of the second, New Brockton scored one point, kicking off the game at 1-0. At the top of the third, the Squadron took the lead by scoring two points and bringing the score up to 2-1.

The Squadron fell defeated again in game two with a score of 6-1.

Even though the season ended on a lower note, the Squadron still remains proud of the accomplishments they’ve made this season.

The team will bid farewell to one senior this year, Brightwell, but even though he is the only one leaving, the team will be losing a multi-talented player.

“He was our best pitcher this year, he was number two in batting and he was one of our best infielders,” Jordan said.

“You can say we’re only losing one, but we’re losing a really good one. He’s a guy that made a big impact on our team.”

The final record for the Squadron’s season was 16-8.

With this season behind them, the Flying Squadron now prepares for next year with summer workouts and training.

“These guys have been a pleasure to coach. They played hard all year and played the right way. They love to play the game, and it’s been a pleasure,” Jordan said.

“I’m really excited to coach these guys again next year.”