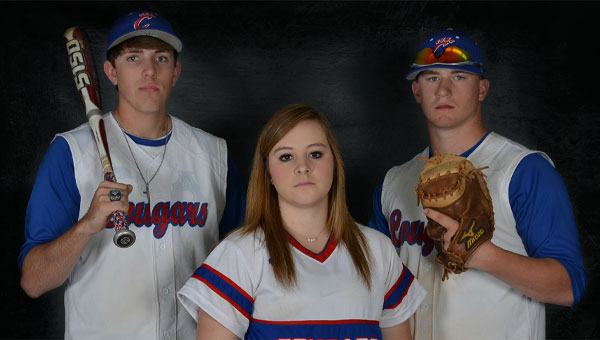 Pictured are, from left to right, senior baseball and softball players Caleb Tisdale, Emily Holley and Collin Holloway. The seniors were recently honored by CCA at a dinner to thank them for their dedication to the school.

SPECIAL TO THE JOURNAL: RAILEY AYERS

On a damp Friday afternoon in Butler, Ala., senior Caleb Tisdale stepped off of the mound for the last time. As he hit his knees after a 9-4 loss in the last game of his career, he didn’t know whether to blankly accept the fact that “it’s over,” or give in and reflect on what had just happened.

What had just happened, in a nutshell, was that Tisdale pitched what was near the best game of his varsity career. Moments after triumphantly stepping out of the dugout to strike out over eight batters, a few well-timed hits sent the entire cougar defense into a whirlwind. After a few small mistakes that no single defender could be blamed for, chaos ensued, and it was too late to get the runs back.

Tisdale was now walking toward his opponents in line, telling them that they played a good game, but with every handshake flooded a new memory. Memories of rushing to a state championship trophy after winning it all last year appeared, as well as memories of playing third base for the JV team years back. In a few short moments, he recalled memories as early as tee-ball, and as recent as the day before, where they had celebrated their own victory.

Senior Collin Holloway was pitching in the pouring rain, which eventually led to a long delay and the calling of the game. Center fielder Nathan Scoggins had ignited a spark with a walk, and then stole around to third base. The spark became a flame when sophomore Clayton Hester drove Scoggins in with an RBI single.

Junior Kyler Weeks followed suit, hitting Hester in with a single to left field. Tisdale contributed with another RBI, as well as Scoggins, who drove himself around to score once again. Holloway boasted three strikeouts and allowed only one run. Game two began, and a few double plays and multiple balls hit straight into the hands of Patrician defenders made for a final score of 8-4, and a series tie at 1-1.

A single victory over the Saints on Thursday would not carry over to Friday. The reality set in for Tisdale- it was really over.

“I’m very blessed to have been a part of this. We all tried our best and gave it all we had, but we just didn’t have the luck we needed,” Tisdale said.