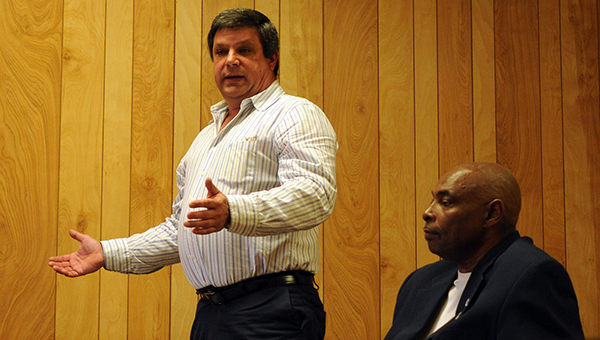 Michael Smith, co-owner of MJ’s Kitchen and Bath Supplier, discusses the company’s plans with City of Georgiana and Butler County officials during a meeting in December. (File photo)

Alabama attracted more than $7 billion in investments and added nearly 20,000 new jobs last year, according to a report released Friday.

The Alabama Department of Commerce’s 2015 New & Expanding Industry Report, which tracks economic development across the state, showed that a total of 19,262 new and future jobs in Alabama were announced last year, an increase from 18,157 jobs in 2014. Limestone County was the No. 1 county for new and announced jobs, with most of its total of 2,618 stemming from Polaris’ $140 million manufacturing facility.

According to the report, companies made a total investment of approximately $17.7 million in the county during 2015 and created 36 new jobs.

Much of that impact was made from existing companies such as Hwashin America Corporation, Kajan Perfection, REF Alabama and Key Safety Restraint Systems expanding their operations, however, there was one new company that located in the county during the past year.

In April of 2015, MJ’s Kitchen and Bath Supplier opened in Georgiana.

The company is the venture of two former employees of CorStone Industries, which was located in Greenville for 16 years before shuttering its doors in 2015.

MJ’s, which is owned and operated by Michael Smith and Jimmy Hunnicutt, manufactures solid surface kitchen and bathroom fixtures.

The company made an initial of $80,000 and created seven new jobs in the county.

“My chief priority continues to be the focus of creating jobs and new opportunities for citizens across the state,” Bentley said in a statement. “This new report shows once again that Alabama is well-positioned to achieve those goals because of a skilled workforce, proven job-training programs and a business climate that promotes growth.”

Greg Canfield, Secretary of the Alabama Department of Commerce, said the 2015 economic development report reflects several significant trends taking place in the state’s economy. These include accelerating expansion in the aerospace sector linked to the production start-up at Airbus’ new Mobile manufacturing facility, and continued robust growth in the automotive industry.

In addition, he said, Alabama is attracting a rising number of projects that are creating brainpower jobs in fields such as engineering and research and development. There are also new opportunities for Alabama in high-tech industries following Google’s decision to build a $600 million data center in Jackson County.

“Alabama’s economic development team is coming off a landmark year and will continue to pursue the kind of projects that can have a profound impact on the future of our state,” Canfield said. “We are working hard to create an environment that sets the stage for growth in targeted economic sectors and the creation of high-paying jobs across Alabama.”

Tuscaloosa County was No. 1 for new capital investment in 2015, with projects valued at more than $1.5 billion. Much of that is tied to a large-scale expansion planned for Mercedes-Benz’s Alabama assembly plant.