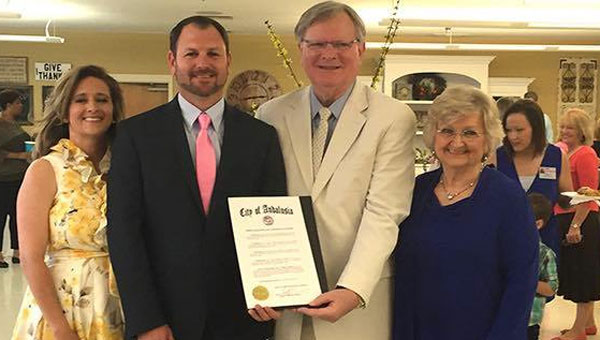 In 1975, Dale Sasser became a Licensed Nursing Administrator while he was employed with Max-I-Care Centers out of Wetumpka. During the next 10 years he worked as an administrator at the Luverne Nursing Home as well as a Max-I-Care Regional Administrator.

In 1985, NHS Management purchased the Max-I-Care homes, and Sasser became a Regional Director for its Southern Facilities. In 1987, he decided to venture out and purchased Andalusia Health Care.

In January 1990, the ground was broke to build a new facility in Andalusia called Andalusia Manor. The vision was to soon merge the two homes. Andalusia Manor opened its doors on April 2, 1991, but unfortunately Sasser passed away on October 21, 1992, and never saw his vision made a reality.

“It was a Tuesday,” SalLee Sasser-Williams said.

“We did not miss school for anything. Stallion and I had perfect attendance from kindergarten and on.” But the siblings have missed little since that time. Even in those days, they helped out in the family’s business.

“I remember putting the number on the door when the Manor was built,” Stallion Sasser said. From 1991 until 2007, Andalusia Health Care and Andalusia Manor operated as two separate healthcare facilities.

In March of 2006, construction began at Andalusia Manor to expand office space, patient dining and rehabilitation space and to transfer the 42 beds from Andalusia Health Care. Merging the two facilities allowed for more patient care in a bigger, newer home. This was Dale Sasser’s vision.

His dream became a reality in 2007 when staff and residents made the transition to Andalusia Manor. Andalusia Manor was their father’s vision, and one they begged their mother to keep for them when Dale Sasser passed away just 18 months after the Manor open its doors.

“He was in a car accident coming home from Montgomery where he was working on a deal with a partner for another nursing home. Daddy was the type of person who always wanted to come home and be with his family and sleep in his own bed. Family and home were first in his heart,” Sasser-Williams said.

“He was a family man, but his second love was the elderly. It was certainly his legacy that we would be caring for the people who took care of us.”

When their father died, their mother, Sheila Horn Sasser, had several opportunities to sell the family’s business, which also included other nursing homes.

“We have to give all the credit to our momma,” Sasser-Williams said.

“She could have sold, but she knew our hearts were here. We asked her to just give us time to get through school. She kept Daddy’s dream for us. There were a lot of sacrifices involved, and we are so blessed to have such a wonderful momma.”

The siblings said the family owes gratitude to David Dennis, who managed the business after their father’s death, and also Don Maples, who was and still is their health care consultant/accountant.

“Don is one of the best people I have ever known,” Sasser-Williams said.

“He has always been an important part of our business family.”

Sasser-Williams is now the Director of Operations for Sasser Enterprises, which includes Savannah Terrace Assisted Living located next door to Andalusia Manor and Southland Nursing Home in Marion, Ala.

At the age of 14, and without his mother’s knowledge, Stallion Sasser applied for a summer job in the Maintenance Department at Andalusia Health Care.

“Merle Neese, the administrator at the time, called momma and said she had to hire me because I interviewed so well,” he recalled. Now, Stallion Sasser is the assistant administrator at Andalusia Manor.

In the last few years, Andalusia Manor has made some upgrades within the home.

“We have installed new flooring, painted hallways and even upgraded our technology with Wi-Fi access to our residents and their families as well as our visitors,” Stallion Sasser stated.

“We have just recently implemented electronic records on our halls and nursing stations.” It’s all part of Dale Sasser’s dream, the plan to a make a home for the residents and for the employees to be up to date on technology access, according to his children.

“Our Daddy instilled in us that this nursing home should not and would not be institutional,” Sasser-Williams said.

“We are taking care of our friends, family and neighbors. We are taking care of the generation who took care of us. Whether it is long term skilled care, respite care or health rehabilitation services, Andalusia Manor strives to serve the young and old with a caring staff who are dedicated to quality of care.”