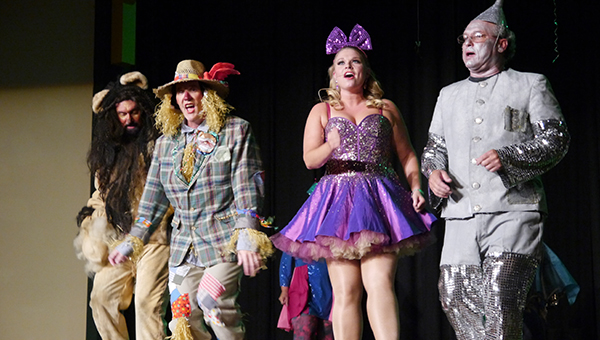 From left to right, Tom Payne, Dent Neilson, Stephanie Connor and Steve Norman perform “Ease on Down the Road” during the opening night of Putting on the Ritz. (Advocate Staff/Angie Long)

It took months of preparation: many hours spent memorizing lyrics and perfecting choreography, sewing, fitting and altering costumes, tweaking the lights and sound. And there’s all those last minute details — not to mention butterflies in a few stomachs.

When the curtain rose for the 10th anniversary production of “Putting on the Ritz” Thursday night, the cast of 64 delivered for director Nancy Idland and a capacity crowd at the historic downtown theater.

Following the projection of a special video shot in front of the Ritz last month to kick off the show, its three masked stars — Bobby Johnson, Dent Neilson and newcomer Wayne Ingram — seemingly jumped from the screen into the auditorium, earning delighted laughter from the audience.

POTR vets Abbie Salter and Madison Castleberry promised “Something’s Coming” in song before the adult cast arrived, sporting  lots of sparkling sequined black and gold and broad smiles to let the world know it was indeed time for a “Celebration” that would last “All Night Long.”

“When I see all those opening costumes under the lights on stage, I go ‘wow,’” said Idland before the show.

It wasn’t just the costumes that wowed on opening night. Soaring vocals from seasoned POTR soloists such as Vicki Burt (“Seasons of Love”), Hannah Miller (“Thank You for the Music”), April Lowery (“The Wizard and I”) and Starla Jones (“A Spoonful of Sugar”), along with the soulful sounds of Kenneth Robinson (“Love Train”) and the down-home humor of the “Soggy Bottom Boys,” a.k.a. Kevin Pearcey, Keith Gibson and Steve Norman, proved audience-pleasers.

Perhaps the most remarkable performance of the night was that of first-time Ritz Player Stirling Hamilton. The sixth grader’s angelic voice and spot-on English accent mesmerized the audience as Dickens’ wistful young orphan in “Where is Love” and “Who Will Buy?” from the musical “Oliver.”

“I had tears in my eyes during his songs,” admitted Julian Katz, Stirling’s proud grandpa.

Stirling and his fellow youth cast members made many a kinfolk proud Thursday night in favorite numbers from past shows including “Ghostbusters,” “Consider Yourself” and “Chim-Chiminee,” joined by POTR vet Tommy Ryan as the lucky chimney sweep.

Colorful new costumes and high-energy performances enlivened the “Wizard of Oz” segment, with Neilson, newcomer Stephanie Connor, Norman and Tom Payne featured as the Scarecrow, Dorothy, the Tin Man and the Lion ready to “Ease on Down the Road” to the Emerald City.

Along with the evening’s entertainment, attendees had the opportunity to browse among a variety of items donated to the silent auction held before the show in the Ritz Reception Room. The auction continued on Friday night with new goodies added to the selection.

“Come out for the last chance to see our fantastic talent as we celebrate ten wonderful years of musical fundraisers for the Greenville Area Arts Council,” said Idland.