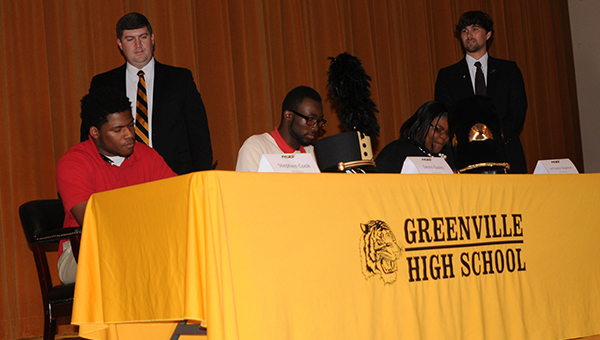 For three Greenville High School seniors, the music plays on.

“I am extremely excited and proud of Devin, Stephen, and JaFreshia for signing music and band scholarships to continue their education at Alabama State University,” said Johnson. “They will be greatly missed (in the GHS band) upon their graduation, but seeing them continue on and participate in music in college is definitely a rewarding experience for their band director. Because of their hard work in high school, they will be leaving a wonderful foundation that our current band students can build upon. The example that they are leaving behind will hopefully inspire our current band students to reach those same heights so they too may be recognized by different colleges and universities.”

Cook, who plays the baritone saxophone, was a member of the GHS band for eight years and the marching band for six years. During his time at GHS, he has been involved with several different ensembles including jazz band, the basketball pep band and symphonic band.

Cook, who has two aunts that attended Alabama State, said it has long been a dream of his to attend the school and play in the band.

“It means everything to me (to sign this scholarship),” said Cook. “I’ve wanted to go to Alabama State and play in their band from a very young age. I’ve always thought it was the coolest thing to do.”

Shepherd, who will join the concert band at Alabama State, said the school was just the right fit for her.

“I chose Alabama State because I feel at home there,” she said. “I love the band there and I felt like I could be a great asset to the concert band.”

Shepherd said she is looking forward to being exposed to different styles and genres of music while performing at Alabama State.

While at GHS, Shepherd played in the band for eight years and the marching band for six years. She was named an all-state musician on the clarinet.

Gavin said choosing Alabama State was an easy decision based on his vast experience with the school, and relationships with current students at the university, such as a former GHS bandmate.

“I’ve been to the band camps and the university plenty of times,” said Gavin. “… I’ve always had a great experience, and I know that Alabama State loves and supports its students.”

At Alabama State, Gavin will be a part of the concert band, marching band and choir.

While at GHS, he was a member of the band for eight years and the marching band for six years. He has been named to the all-state band each year since his seventh grade year for trombone, clarinet and voice. He has also been a part of numerous collegiate honor bands during his time at GHS.

Dr. Bryan Reeves, who serves as director of the concert band at Alabama State, was on hand for the signing ceremony.

“We’re extremely pleased, and very excited, to have these three students come to ASU,” he said. “Each of these students is a very talented musician, but equally important, these are all good people with great self-discipline and very motivated. Frankly, that’s what we are looking for at ASU. We’re looking for people who are not only talented musicians, but will have a high degree of academic success at our university. We’re very pleased to find this right down the road at Greenville High School. We just can’t say enough good things and how excited we are to have these three join our university.”

Creativity on display at annual luncheon