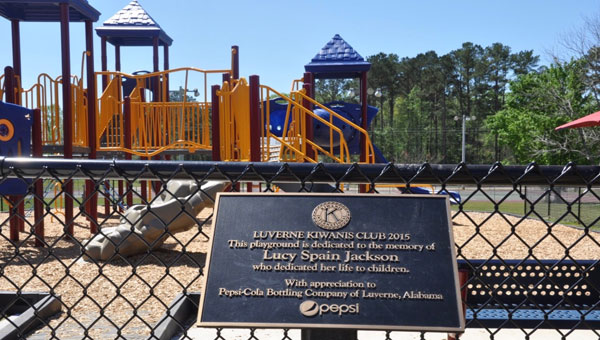 Last week, the Luverne Kiwanis Club held a dedication ceremony in honor of the new playground established in E.L. Turner Jr., Park. These plaques stand in honor of Alvin Bland and Lucy Spain Jackson, both of whom dedicated much of their time and attention to helping children. (Photo by Beth Hyatt)

The primary focus of Kiwanis is helping children. A few years ago, the Luverne Kiwanis Club began discussing the need for a playground at Turner Park for the kids of the community. Kiwanian Travis Colquett took the project and tirelessly worked on it. The playground would cost $110,000.00. He obtained grants and individual donations. He worked with the city, the park board and many others.

Alvin Bland was a charter member of the Luverne Kiwanis Club from 1977 until his death in 2013. Alvin was a champion for children. His wife, Linda Bland, and the Luverne Garden Club, contributed to the completion of the playground. The Kiwanis Club placed a plaque on the bench just inside the gate in Alvin’s memory. 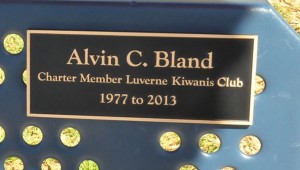 Alvin Bland served as a charter member of the Luverne Kiwanis Club. His plaque is mounted on one of the benches inside the playground. (Photo by Beth Hyatt)

While Kiwanis was soliciting additional funds, the Jim Jackson family saw an article in The Luverne Journal and immediately donated, in the memory of Lucy Spain Jackson, the balance needed to complete the playground.

Lucy Jackson was known and loved by everyone because she loved everyone, especially children. She dedicated her life to the care of her family and to the care of other children. The Luverne Kiwanis Club has placed a plaque outside the gate of the playground dedicated to her memory. The plaque also expresses the appreciation of Pepsi-Cola Bottling Company of Luverne for their generous contribution toward making this playground a reality.