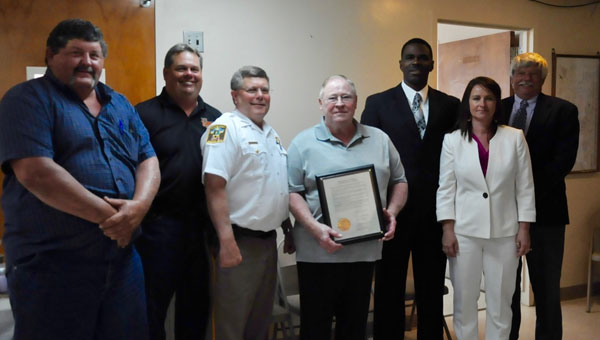 After almost 13 years of service with the Crenshaw County Sheriff’s Office, James “Jimmy” Lecroy has bid the town of Luverne farewell.

“It’s been a pleasure here. There’ve been some rough times and rough years, but we survived. I wouldn’t give anything in the world now for the experience,” Lecroy said.

With a combined total of 42 active years in law enforcement, Lecroy has been a part of many circumstances and is well-rounded in many areas of police work. Lecroy first served as a Dothan police officer in 1969. After his work there, he went on to work at the Birmingham Police Department before returning to Dothan until 1976. For the next 20 years he worked with the Alabama Alcoholic Beverage Control Board Enforcement and worked with undercover narcotics and as a field agent.

During his time as an officer, Lecroy successfully completed three degrees in six years. He received his associate degree at George C. Wallace Community College in Dothan, his bachelor of science in psychology with a minor in criminal justice and his masters of science degree in criminal justice administration from Troy State University.

It was during his master’s degree that he learned how to do budgets and write grants, which would prove beneficial to him in his job as chief deputy for Crenshaw County.

Lecroy joined the Sheriff’s Office in Crenshaw County the first week of April 2003, and has enjoyed the job ever since.

“This job is always a new ballgame, and that’s what keeps it interesting,” Lecroy said.

“When I came here, that was one of the things I loved the most about it was the friendliness. This is a nice, small area. I pride myself on being a people person, too.”

During his time in Crenshaw, Lecroy was responsible for a multitude of tasks, such as writing and preparing grants, helping run courts as bailiff for the judge and helping bring the office into the technological age. According to Lecroy, he helped the office get laptops in some of the officer vehicles and also upgraded to computer operations within the office.

The impact Lecroy had on the county is evident in the many fond farewells he received, as well as the memories left with his fellow officers.

“I’ve worked here as a deputy and at the time, Mr. Jimmy was the chief deputy. I knew what kind of person he was and I knew what he was doing,” said Crenshaw County Sheriff Mickey Powell.

“It was a blessing to me to have him here. He already knew the fundamentals, the day to day activities and he just basically let me settle in and take the reins. He’s been a tremendous help to me.”

While the daily activities of the Sheriff’s Office are sometimes unknown to the public, Powell and Lecroy know that it takes an entire team to accomplish these tasks. Without the help and determination of the entire force, the office would not be where it is today, according to Powell. Powell also knows that without the encouragement and stability Lecroy brought to the office upon his appointment as sheriff, Powell might not be where he is today.

“He took so much pressure off me. The position of chief deputy carries a lot of work and a lot of pressure. The chief deputy is the sheriff’s right hand man,” Powell said. 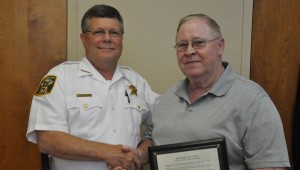 After 13 years of service as the chief deputy of the Crenshaw County Sheriff’s Office, Jimmy Lecroy will enjoy the life of a retiree. Pictured are Sheriff Mickey Powell (left) and Jimmy Lecroy (right). (Photo by Beth Hyatt)

“He’s been my right hand man; I hated to see him go. He’s always been a close friend of mine, and we’ve always worked great together. I always considered what he told me. If he gave me advice, I listened to him.”

Lecroy noted that the most valuable lesson he took away from his years in law enforcement was simply to get along with people. While this might not have proved easy for him every time, he knows that keeping this in mind helped negate many unfortunate and potentially dire situations. He stressed the importance of remaining calm in the face of adversity and taking the time to understand the motives and meanings behind the actions of others.

While he hates to leave the office where so many memories and friendships were made, Lecroy knows that it is time to pass the torch and take to his newest adventure. He isn’t worried, though. He is confident that Powell and the team currently assembled are more than capable to take up the call and press on.

A small get together was held Monday morning in the Sheriff’s Office to honor Lecroy and all he has done for the county. The Crenshaw County Commission presented him with a plaque noting his time served, and the group exchanged their favorite stories regarding Lecroy.

“This party was not for me it was for everybody, because I could not have done my job without them. Without Mickey, I wouldn’t have had a job. I enjoyed working here. All of my time here was memorable. Overall, I’m very honored. I eased in the door in April 2003 and I’m going to ease out the same way.”