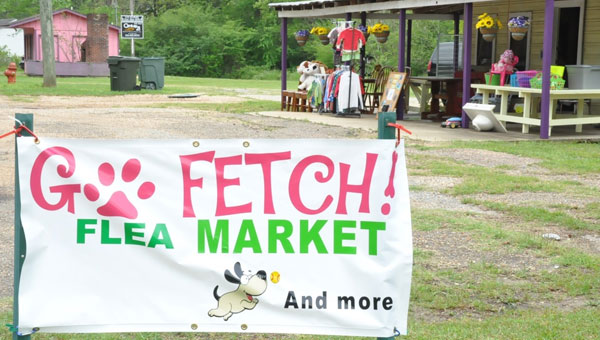 When Go Fetch Flea Market and More first opened in February, the Crenshaw County Animal Society never dreamed that it would become as big of a hit as it did. With a plethora of different items available, the group hopes to continue raising funds to help their foster pets. (Photo by Beth Hyatt)

Have you recently been searching for a place to take your unwanted or gently used items while simultaneously helping out a good cause? Well, the search is over. In February, the Go Fetch Flea Market and More opened and since then has grown tremendously thanks to donations.

When the idea of opening a store first came to Kim Thiem, a founder of the Crenshaw County Animal Society, she wasn’t quite sure how well it would take off. After thinking it over and seeing the growing popularity of similar stores in surrounding areas, the idea began to take root.

“The animal society uses this to raise funds for our foster program and other services that promote the value of companion animals,” Thiem said.

“You can donate your unwanted stuff for unwanted animals to get a forever home.”

The store officially opened on February 13 and was celebrated with a ribbon cutting ceremony and a showcase of many adoptable pets.

The store not only boasts donated items, but also showcases many handmade items, such as hats, scarves, baby clothing and many other items, which take extra time and care to craft according to Thiem.

Thiem says that new items arrive weekly, and the group is thankful for the community support they have received so far.

Along with having adoptable pets on site at the store, the society will also be on hand each Saturday afternoon to offer the opportunity for microchipping procedures for interested pet owners; the cost is $30 and comes with a lifetime registry.

An online store is also in the works, and Thiem is excited to see that come to fruition as well. It is her hope that by adding this online element to the store, more customers from different cities, counties and even different states will have the opportunity to purchase some of the hand-crafted items on sale in the store.

The society will also be present this coming weekend offering free coffee and hot cocoa at the first ever Friendliest City Festival.

“We’re going to have a booth there, and we usually bring a foster pet out there,” Thiem said.

“People can come on down, check out a pet and get a little pet love.”

While the idea to open the store was new and a bit intimidating at first, Thiem and the society know the importance of doing as much as possible to promote their cause. With the store serving as a centralized location, the group believes that showing off adoptable animals will also be a perk.

“With the store where it is, I think it’s a little easier to see sometimes, because we foster out of our homes. If it’s centrally located, people can stop, get a snack, shop and see the animals,” Thiem said.

“Pictures are great, and we advertise in the paper, on the radio and on Facebook, but seeing them in person really helps. That’s why we try and go to all of the festivals.”

So far, the endeavor has proved successful and has resulted in many animals finding forever homes. Go Fetch Flea Market and More also sells Crenshaw County Animal Society memorabilia and the group is always open to those who wish to volunteer their time or talents. Donations in all forms are also graciously accepted.