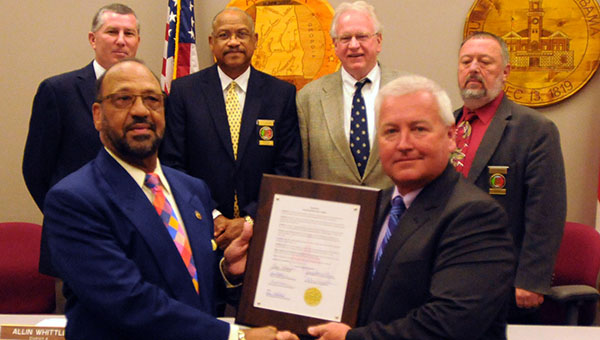 Maj. Albert McKee walked out of the Butler County Correctional Facility as the jail administrator for the final time on Jan. 31.

But his presence is very much still felt inside the facility.

McKee oversaw the county’s correctional facility for 13 years, dating back to previous Sheriff Diane Harris’ administration, and had a hand in helping select his replacement.

During his tenure, McKee saw it all – department growth, technology advancements, types of prisoners and new facilities.

On Monday, the Butler County Commission honored McKee by passing a resolution recognizing his service to Butler County Sheriff’s Office and the county as a whole.

Commissioner Frank Hickman, who was on the commission when Harris hired McKee, thanked McKee was a “job well done.”

“We have known for years that we didn’t need to worry about the correctional facility,” Hickman said. “It was under control because Mr. McKee was handling it. He served well. He served with honor and distinction, and I appreciate his service.”

“The jail is the biggest headache of any sheriff,” he said. “I haven’t had a headache over there. He’s done an outstanding job.”

McKee played a key role in helping form the policy and procedures following the opening of the new correctional facility in 2008. Prior to its opening, McKee has a nearly impossible job, according to Commissioner Jesse McWilliams, who was the chairman of the commission at the time.

McWilliams recalled a cold night when he and McKee walked the short distance between the courthouse and county jail faced with yet another problem in the dilapidated old facility.

A leak had sprung, flooding the floor with freezing water, and both McWilliams and McKee were exasperated. Problems at the jail sprung up daily, from brawling inmates, to overcrowding, to lack of sufficient heating. There was even a federal lawsuit in 1996 citing the jail’s deplorable conditions.

“We both made a commitment right there we were going to see a new jail built in Butler County,” McWilliams said.

Long years of waiting finally came to an end in November of 2008 as county officials welcomed the public to a open house for the new $6 million Butler County Correctional Facility.

“For four years (McKee) had a job that was terrible,” McWilliams said. “The conditions in that old facility were awful. But Al McKee made a commitment that night that he was not only going to stay around to get that facility built, but he was going to stay around and get that facility built where it would be a benefit to this county and the citizens of this county. We have never had to borrow any more money on that facility to keep it afloat. We’ve never had to shut it down because we didn’t have the money to operate it. That’s a direct result of Al McKee’s leadership. We owe him a great deal of gratitude for what he’s done for this county. We’re going to miss him.”

Commissioner Allin Whittle reminded Manning Monday of just how big the shoes he has to fill really are.

“Jamie, you’ve heard the expression, ‘You’ve got some big shoes to fill?’ Well, you’re quite a bigger fellow than he is, but the big shoes you’re going to have to fill are ones of integrity, of honesty and ones of someone that has done the job better than anyone else could ever have done it,” Whittle said.

Whittle said that one could tell what kind of corrections officer McKee was simply by glancing at him.

“You could see it right away,” Whittle said. “You could actually see it before he said a word because of the way he dressed every day. When he had the uniform on it was crisp. It was clean. It was beyond reproach from anybody. He stood out no matter where he was. Jamie will do an excellent job, but we’re going to miss Al McKee.”

Manning described McKee was a mentor.

“Maj. McKee operated the facility like a well-oiled machine,” he said. “He took me under his wing and molded me with the help of Capt. Sharon Smith. He helped prepare for what was to come. I will truly miss him.”

McKee, who humbly thanked each commissioner following their comments Monday, assured them that the correctional facility would be well managed with Manning at the helm.

“You guys are in good hands. My subordinates made me what I am,” McKee said.

McKee also thanked God for this chapter of his life.

“The Almighty says we’ve got three scores and 10. He’s allowed that for me, plus some. This award is just another chapter I can put in the book of Al McKee,” he said.

Hardin assured the commission that while McKee may no longer be the active administrator, he would be available to assist if needed — even if the sheriff had to track him down.

“We’ve got his number. If he changes his number we’ll run him down,” Hardin said with a smile.