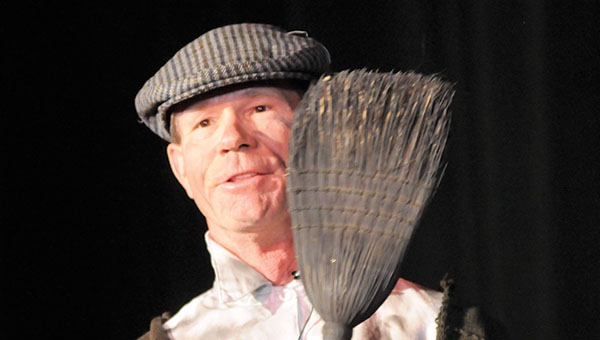 Tommy Ryan, who has performed in each of the previous nine Putting on the Ritz productions, will once again take the stage later this month as the Greenville Area Arts Council celebrates the 10th anniversary of Putting on the Ritz. Ryan, along with GAAC Executive Director Nancy Idland and Ritz Player Vicki Burt, shared their thoughts on the upcoming show with members of the Rotary Club of Greenville on Thursday. (File Photo)

Ten years ago this spring, the Greenville Area Arts Council took a definite departure from business as usual in terms of a fundraising event for their artistic season.

Little did those members know it would prove to be the start of something really big in their hometown.

Roberta “Bobbie” Gamble, Greenville’s grande dame of the arts, had been feted in 2006 with a surprise show in honor of the retired educator’s 80th birthday. The show reunited many of “Miss” Bobbie’s former high school drama students, who came together to reprise the best of Broadway for their beloved mentor on the storied stage of the Ritz Theatre.

The production proved to be a tremendous success with Gamble and her many well wishers. Audience members laughed, cried and sang along, clapping and cheering until hands and throats alike were sore. You could say a kind of magic was made at the Ritz that day . . . and, as it turned out, it was only the beginning.

“After Miss Bobbie’s 80th birthday celebration, I called her Monday morning after it was all over and she had time to breathe, and she said, ‘Nancy, that was the most phenomenal thing you’ve ever done,’” said Nancy Idland, now the executive director of the Greenville Area Arts Council. “And I said, ‘Isn’t it time? Can’t we put on a community show? If you’ll show me the way and hold my hand, I’ll do all the hard part. You can just sit in the chair and tell me what to do and she said, ‘Yes. I think it’s time. I will help you do that.’ So, 10 years ago today put together this show, and little did we know that after 10 years we would still be putting on the show.”

In 2007, the 25th anniversary of the arts council, Gamble, Nancy Idland and their fellow GAAC members made an ambitious decision.

They would bid farewell to the gala fundraisers of the past and invite patrons of the arts to a lively musical revue featuring an abundant pool of homegrown talent. Borrowing from the title of the Cole Porter classic, the revue would be called  “Putting on the Ritz.”

It has been wildly successful in large part because of the enthusiasm of Idland and the Ritz Players.

“We have a passion for it,” Idland said. “We love it. We love what we do because we are helping to enhance our community by keeping the arts alive.”

With this year marking the 10th anniversary of Putting on the Ritz, Idland and Company are promising the best of the best as audiences “Celebrate the Good Times” at the Ritz.

“We are bringing back many of the numbers we’ve featured before such as ‘Brand New Day’ and the songs from ‘The Wizard of Oz’ and ‘Mary Poppins,’ but there are also some special twists and surprises—including our opening video starring three mystery guys and our terrific cast,” teases Idland.

A retrospective video highlighting the show’s history will be shown in the theater each night prior to the curtain rising.

This year’s show features a number of new faces, both young and old, and many familiar faces, such as original Ritz Player Tommy Ryan, who has performed in each of the previous nine shows.

“Putting on the Ritz really is special,” Ryan said. “It’s laborious, but it’s a process that is so much fun. When it’s over, I’m sitting around wondering what I’m going to do now.”

Idland said that this year, there will be 64 cast members singing and dancing across the well-worn boards of the Ritz Theatre’s stage.

“We have 64 performers that are just amazing,” she said. “It’s going to be a fantastic show.”

The curtain will go up on this year’s production April 21 with encore performances on April 22 and 23. The show begins at 7:30 p.m. each night.

Tickets to the shows are available at The Pineapple, The Medicine Shoppe and McFerrin’s Jewelry. The cost is $20 for adults and $15 for students.

Andy Brown contributed to this story.

DYW orientation set for May 1