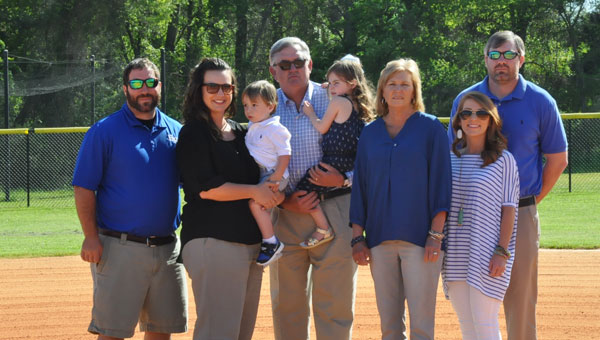 SPECIAL TO THE JOURNAL: KASEY POUNCEY

Wanda McVay Pouncey began her career in education in fall of 1978. She was hired as a first grade teacher at Highland Home School. She served as cheerleader coach for several years. At that time, there were no girls’ sports on campus. In the 1980s, girl’s basketball and softball were added to the sports program. She served as an assistant until 1995 when she was named head softball coach.

Pouncey enjoyed all sports but had a passion for softball. The softball program did not have a field on campus. They either shared a corner of the football field with the baseball team or played their games at the community recreational park two miles down the road  at Ronald’s Fields, where Coco Mama’s restaurant is located today.

Pouncey’s vision was to have  a field on campus. She talked with PTA President Rita Beasley and then Superintendent Sammy Carr and finally persuaded them to purchase the land that adjoined the school property, so they could build softball and baseball fields on campus. The dream of having their own field finally came true in 1997.

Pouncey’s goal was to make it a field that the girls would be proud of. At that time, this very field was a heavily wooded area that was covered in kudzu and was being used as a community landfill. They did many fundraisers and eventually added lights to the field. After getting the softball field, Highland Home School was able to host tournaments and even won their first regional championship here in 1999.

Through Pouncey’s efforts, the Highland Home Lady Squadron has added a girls’

weight room  with a locker room  for the female athletes, a press box and concession

stand, a building that serves as a restroom and storage and an indoor and outdoor batting cage. Later in her career, utilizing the new girl’s weight room, Pouncey formed a

girls’ weightlifting team and competed at the state tournament for six years. After getting state runner up the first year, they won state the next five years in a row.

If you ask any of the former players here today, they will tell you Pouncey is more than deserving of this honor, having the Lady Squadron softball field named after her.  As one former player stated, “That futon in her office up the hill held a lot of heart to hearts and solved a lot of problems.”

Pouncey’s family has left a legacy at Highland Home School, considering the adjacent baseball field is named after her brother, the late Coach Ronnie McVay. Under her guidance, many  girls have  been afforded the opportunity to attend college. Through the years, several of her players were offered scholarships and played at the next level at both junior colleges and four year  universities. The softball field at Highland Home School  will now and forever be known as “Wanda M. Pouncey Field.”

PROFILE: Crenshaw through the years

The following article was part of the Profile 2016 special section of The Luverne Journal. The section in its entirety... read more